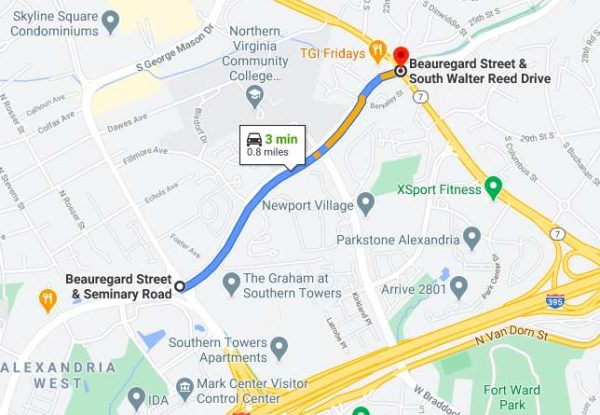 Update at 4:50 p.m. — A spokesperson for the City of Alexandria said the city is not “proposing” bike lanes, but that bike lanes are one of several options being considered for North Beauregard Street.

T&ES feels the article is still misleading and not providing accurate information. We request you change the headline to reflect the actual input we are asking from the community.

To clarify, at T&ES we conduct feedback for several streets on the repaving list every year to adhere to the City’s Complete Streets Policy and Beauregard is no exception. Beauregard is scheduled for repaving this year and we are soliciting feedback on ways to make the stretch of road safe for all users, including people that drive, ride transit, walk, and bike. Bike lanes are not being considered or proposed here because the Beauregard Trail CIP project will provide a shared-use path adjacent to Beauregard with bicycle and pedestrian connections to other areas of the City. Further, staff has not developed any design nor proposed potential improvements for the street thus far. Safety improvements will be based on the feedback we’ll receive from the community and safety best practices.

The City of Alexandria is looking for public feedback on a plan to repave North Beauregard Street and — potentially — add new bike lanes, along with curb ramps, upgrade crosswalks, and more.

The planned repaving would run along North Beauregard Street from Seminary Road to King Street near Northern Virginia Community College. The street is primarily two lanes in each direction for most of that .8 mile stretch.

Part of the Complete Streets policy adopted by Alexandria in 2011 requires improved accessibility of city streets that, along with other plans like Vision Zero, means added infrastructure for pedestrian and cyclists.

The rollout of that plan has been occasionally contentious, to say the least. A political faction of civic activists arose out of a Facebook page that started with opposition to bike lanes installed on Seminary Road as its rallying cry, though the bike lanes had their fair share of ardent defenders as well.

Proposed changes to the street, according to the city, include:

Locals are encouraged to submit their feedback online by Friday, March 26th.

END_OF_DOCUMENT_TOKEN_TO_BE_REPLACED

More Stories
Poll: Should ACPS scale back the role of School Resource Officers?Woman stabbed in head and child returned after abduction in Arlandria