Regional losses to tourism and the hotel industry could be an unexpected windfall for Alexandria’s ongoing efforts to find affordable housing.

During a presentation to the City Council last week, Alexandria Economic Development Partnership (AEDP) President and CEO Stephanie Landrum said that the city could look at streamlining some rezoning to help transform hotels emptied by COVID into affordable housing units.

“We’ve spent a lot of the time in the past talking about office conversion and talking about the economics of that,” Landrum told City Council. “We are going to add hotels to that list. Where does it make sense to encourage the conversion of an older, perhaps considered obsolete hotel, and helping us accomplish maybe some of our affordable or other housing goals — and at the same time investing and encouraging in new hotels in the right spaces?”

The proposal comes as the city balances affordable housing needs with some public reluctance on colocation. The School Board voted unanimously against co-locating affordable housing at the Minnie Howard Campus of Alexandria’s high school, and ACPS noted that the proposal sparked community backlash.

Meanwhile the city — and the region as a whole — have seen a dramatic drop-off in hotel occupancy and revenues. Mayor Justin Wilson noted in a social media post that hotel revenue fell from $1.1 million in July 2019 to around $200,000 in July 2020. 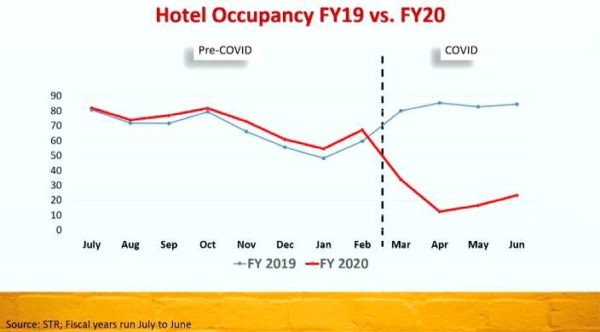 Landrum told ALXnow that AEDP is currently looking over some of those strategies and will come back to Council with a more detailed report.

“We’ll give them a look at our commercial corridors, like office and hotel uses,” Landrum said. “It might be that some hotels decide that travelers aren’t going to come back for a long enough time and maybe they are not approximate to a metro or have enough amenities. They might decide hanging onto the hotel doesn’t make sense and might pursue sale or conversion.”

These would likely be hotels off Eisenhower Avenue or in the West End that don’t have immediate access to central tourism areas, Landrum said, so it’s unlikely this would apply to any Old Town hotels.

The proposal saw some initial support on the City Council, though it will take more research over the next few months to see what the city could do to facilitate that sort of turnover.

“I think it would be interesting in terms of looking at options for future viability in some of those sites,” City Councilman John Chapman told ALXnow. “With the need of housing, coupled with the fact that some hotels might not survive — so what would you do with those buildings?

Chapman said he’d like to see some hotels used as commercial or residential space, though the city will have to work with the building owners to determine that.

“I wouldn’t want to close the door to affordable housing without hearing more about what is planned,” Chapman said. “I’m not trying to jump the gun on that, but I want to say that there’s interest. We’re interested in whatever that second life is [for some hotels], but I don’t know what that process entails and how we change it in a way that makes it fit.”

Chapman said the city should do more to look at other localities to see if any others have gone through similar procedures and gather some lessons learned.

“Is it something we see across the D.C. metro area as it relates to tourism and hotels in their next life?” Chapman said.

Landrum said the city has seen that with some office buildings, and, in rezoning, has had to determine whether case-by-case whether it was appropriate to allow those parcels to have other uses. This has happened a few times before for hotels, Landrum noted, including:

The first two had to undergo a zoning review, while the Broadstone Van Dorn Apartments conversion was done by-right.

“As we’re looking at impact on the real estate market, I think we should be proactive and decide whether this is something we want to pursue,” Landrum said. “Affordable housing is a major priority.”

Landrum said the city would likely start with one hotel space and work in partnership with a local affordable housing nonprofit to test the idea.

The city’s role in this process, Landrum said, would likely be facilitating discussions between property owners and affordable housing developers and nonprofits.

“We would want to talk with nonprofit housing and say ‘you should take a look at this’ or talk with affordable housing developers,” Landrum said. “I don’t see a situation where we would, as the city, step in and try to acquire it ourselves. Our role is to make recovery easy to remove hurdles. We should take next month or two to see: Are there any hurdles? Is there a way for this to happen without having to go through a bureaucratic process?”