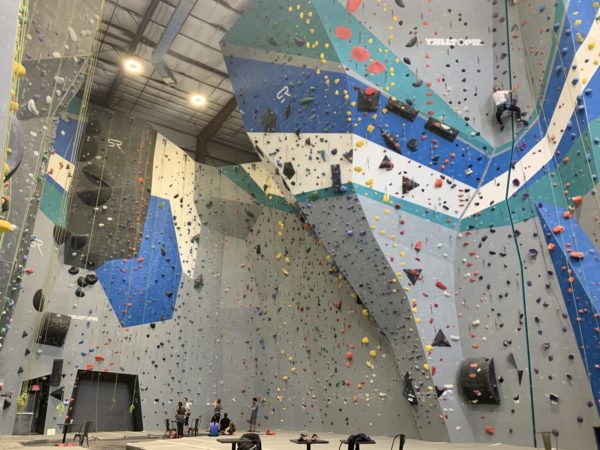 A fall in late November at indoor climbing gym Sportrock (5308 Eisenhower Avenue) led to a hospitalization for one climber.

On Nov. 29, a climber lost control during a climb and fell, at which point the belayer lost control of the rope and was unable to stop the fall, according to Sportrock. Fire Department spokesperson Raytevia Evans confirmed the department responded to a medical call at the facility for a fall.

The climber suffered a non-life threatening injury, is in stable condition and recovering.

While injuries aren’t particularly common, there are still risks associated with the sport and climbers have to sign a waiver at the Alexandria location before ascending any walls. Sportrock has been located at its current Eisenhower Avenue since 1996 and is partially an anchor for a small community of startup businesses in the surrounding area — though the gym has struggled through a slow pandemic recovery.

Below is a statement from Sean Taft-Morales, director of the Alexandria location:

The incident involved a pair of climbers, who have both passed the Sportrock Toprope Belay Test, which allows them to use our climbing walls on their own, and who had belayed without incident on numerous prior visits to Sportrock.  They were not participating in a Sportrock program or working with a Sportrock instructor, but rather climbing on their own and entirely at their own risk. The climber lost control and fell, at which point the belayer lost control of the brake strand of the rope, which resulted in the belayer being unable to arrest the fall of the climber. The climber subsequently fell to the ground, resulting in injury. He is currently stable, and recovering from his injuries.

Sportrock staff witnessed the fall, immediately responded to the scene, followed first aid and emergency response protocols, and called 911. We have taken statements from all parties involved in the incident, as well as from staff and bystanders who witnessed the incident, all of which were in agreement on the facts of the matter, as conveyed in the paragraph above.  Subsequent inspection of all ropes, harnesses, carabiners, belay devices, and other equipment involved in the incident shows that all equipment functioned properly, and there were no breakages or equipment failures. Unfortunately, we must conclude that the incident was the result of belayer error, something that can happen even with the most experienced and highly trained climbers. Our sympathies go out to the injured climber, and we wish him a speedy recovery.

We have thoroughly reviewed the incident, both to ensure that all Sportrock policies and industry standards were followed, and so that we may all learn from it to better prevent further incidents. We have also undertaken a review of our policies and practices to ensure that they continue to exceed industry standards and best practices. Climbing is inherently dangerous, and we encourage anyone interested in the sport to seek qualified instruction.

Sportrock considers safety and education to be absolutely central to our mission. We are a member of the Climbing Wall Association (CWA), and exceed standards set by the industry and the organization. We were one of the first-round gyms to participate in the Universal Belay Standard (UBS) program developed by the American Alpine Club, the first national program designed to standardize and elevate the standard for belaying in the US. Our curriculum and testing criteria are stricter than, and exceed the standards of, the UBS program, and all belay instructors at Sportrock Alexandria are trained in the UBS standard, as well as our own internal standards and requirements.  We consistently fail belayers from other gyms who are unable to pass our belay tests. On the educational side of things, I am a American Mountain Guides Association certified Rock Instructor and Single Pitch Program Provider, among most highly-qualified Climbing Instructors in the region, and I personally train every instructor before they can teach belaying at Sportrock Alexandria.