An Alexandria climbing gym is surviving by its fingertips amid a slow recovery.

“We are talking about a year of survival,” said Sportrock spokesperson Sean Taft-Morales, “not a year of thriving.”

Sportrock is a climbing gym that boasts the tallest indoor rock climbing surface in the Mid-Atlantic. The gym has been located in the city since 1996 and has been part of a small enclave of western Eisenhower businesses that had been thriving before the pandemic.

The gym closed voluntarily before the governor’s order, with Taft-Morales saying the gym’s leadership felt it was unsafe to remain open. The gym was fortunate enough to not have to lay anyone off through the shutdown, but the slow recovery did lead to the first layoffs last month.

The gym’s survival this far has been owed largely to their community, Taft-Morales said.

“We’ve always been a very community focused gym, that’s one of the pillars of our model,” he said. “We’ve been here since the 90s, we’re not new, and it’s still locally owned and operated. Our connection with membership… that really came through for us. Not to the extent that we’re not feeling the financial effects, but had a number of members keep their memberships active through the pandemic and that helped.”

The gym reopened about a month and a half ago, but with heavy restrictions. The plan was, Taft-Morales said, to reopen more gradually over the summer, but those plans seem to have been overly optimistic as the city, and state, have remained at the same level of reopening.

“It’s a huge space,” Taft-Morales said. “According to regulations, we could have something like 350 people in the space. They’re just doing a percentage of your occupancy, which just seems totally nuts. We’re doing voluntary cap of 75 customers at a time.” 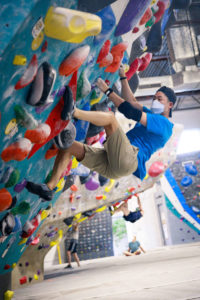 The gym has undergone some coronavirus prevention measures. The large warehouse bay doors are open to allow for some crossbreeze. Climbing appointments are scheduled in two-hour time slots, with the last 15 minutes closed for bleaching and cleaning of the equipment. Taft-Morales admitted it’s a quick 15 minutes.

“It goes by fast, but you do it eight times a day and you get used to it,” he said.

Mostly, the gym has been left on it’s own to find best practices. One of the benefits of keeping staff onboard was repurposing some of them to research and draw up a reopening plan.

“We ended up using a lot of research out of Germany for a lot of our reopening,” Taft-Morales said.

The gym requires mask wearing at all times, including while climbing, to keep customers from breathing on the handholds. Temperatures are also checked and visitors are required to wash their hands and use hand sanitizer before and after each climb.

Despite the precautions, Taft-Morales admitted attendance has been dire.

“Attendance is down,” he said. “Not all our members feel comfortable returning. It’s not a risk everyone can or should take. But it’s enough that we are, multiple days a week, hitting that 75 person cap; at that 6 p.m. shift, for example. We have more traffic than when we initially opened, but it’s significantly down. It’s a dramatic decrease from before.”

Where there has been significant increases, Taft-Morales said, is in outdoor climbing. It’s a full, guided service where a Sportrock instructor brings equipment and helps guide individuals or groups on climbs somewhere out in the surrounding areas, like Carderock.

“We’ve seen a growth in that sort of business,” Taft-Morales said. “I feel more comfortable booking people for groups like that. Our group classes are down, but we’ve easily doubled private climbing. A lot of people are choosing that over coming to the gym.”

Now, the gym is deep in the throes of a climbing tournament that’s been adapted to social distancing. Every year, the gym runs a competition called Beat the Heat. It’s an annual summer member appreciation tournament. It’s typically a large, in-person gathering, but Taft-Morales said that this obviously isn’t the year for that, so the gym adjusted.

“This year, we have a three-week long period where you come in on your own, climb the same routes, and keep a score card,” he said. “Coming up we’ll have our closed door finals, broadcast over Zoom. We’ll still have an event we can come together and watch.”

The finals for the Beat the Heat tournament are scheduled for next Saturday, Aug. 26.

Finals are next Saturday, 29th. In the meantime, some climbers are still escaping the humdrum of the pandemic by headed to the climbing gym trying to fill out their card and set new times.