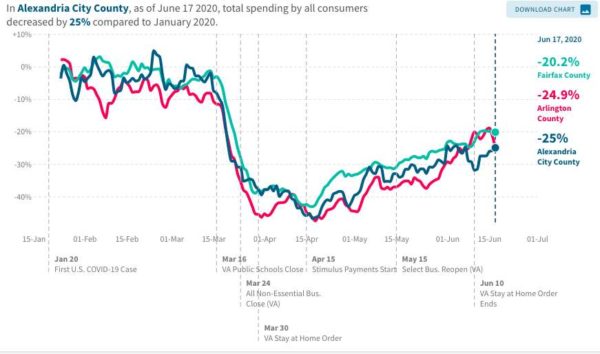 It’s been a rough season for Alexandria businesses.

New data from Opportunity Insights, a Harvard-based team of researchers, shows that Alexandria has fallen lower than its regional neighbors in the percentage change in consumer spending. The data shows that consumer spending across the region started to tank around March 16, when the public schools closed, and for most of the region hit rock-bottom on April 1 when the Stay At Home order went into effect.

While Alexandria, Fairfax County and Arlington have all mostly been trending upward since then, that recovery has been slow. Alexandria’s consumer spending is down 25% compared to what it was in January, with Arlington not far behind it at 24.9%

Mayor Justin Wilson, who shared the data on Facebook, said that it was likely that the focus on hospitality industries in Alexandria was the reason the city was faring worse than some of its neighbors.

For local businesses, that data has been tangible as a struggle to adapt and survive amid COVID-19.

“This is our second week of being open to the public in limited numbers,” said Amy Rutherford, owner of Penny Post (1201 King Street) and Red Barn Mercantile (1117 King Street) in Old Town. “It’s been slower. I wish there were lines out the door, but it’s not.”

Rutherford said sales have been a mix of in-store sales, pickups, and online orders. While Phase 3 of reopening went into effect today, Rutherford said she’s been wary about easing off some of the capacity restrictions in the store.

“My team is still a little nervous about what it means to reopen,” Rutherford said. “I don’t think we need to do anything quickly… I think people in Northern Virginia are smart and they want to get out, but they’re being thoughtful and doing what’s necessary.”

The stores closed in Mid-March, but Rutherford said the month still had a strong showing because the beginning had been going to swell.

“We’re watching the news and always monitoring the cases,” Rutherford said. “We look nationally at where we are and in Alexandria where we are, and we’re taking the pulse of our customers and our team. All of that goes into the considerations before we make any more changes, [we have] to make sure everyone is doing well.”

Even so, Rutherford said it’s been nice to see some of her old customers in-person again.

“In-store sales have been nice,” Rutherford said. “It’s good to see people again and talk face to face, even though we’re behind a mask… Hopefully, we’ll ramp back up. For the year, it’s not terrible because we had a strong first quarter, but still pretty up in the air for what we plan to do or what it’s going to look like.”

The main thing Rutherford said has been a big seller has been puzzles, which people have flocked to ever since they’ve been stuck at home. While she enjoys the in-person interactions, Rutherford still said she hopes more people shop online rather than risking exposure at stores.

“The best thing folks can do is stay safe and not take any additional risks,” Rutherford said. “Then shop at the website or call in to come in when they can. Be understanding. I think people in NoVA are very understanding of policies and have been very patient. People have been kind to us.”

END_OF_DOCUMENT_TOKEN_TO_BE_REPLACED

More Stories
Ask McEnearney: What Are The Most Common Seller Questions?Alexandria Renters Ask Governor to Extend Moratorium on Evictions