While further south Alexandria is finalizing plans for the northern end of the Old Town Waterfront, the overall north point of the Alexandria waterfront is about to get some love too.

At a Planning Commission meeting yesterday approved plans for several new pieces of Potomac Yard, including a sweeping new plan for a 4.6 acre extension at Potomac Yard Park that will run from just south of the planned Potomac Yard Metro station to Four Mile Run.

Sara Brandt-Vorel, a planner for the City of Alexandria, said the new park will be a large, contiguous open space with features like a children’s natural play area, an area for public art funded by developers, and a fitness station. The park also features several areas set aside as flexible lawns. 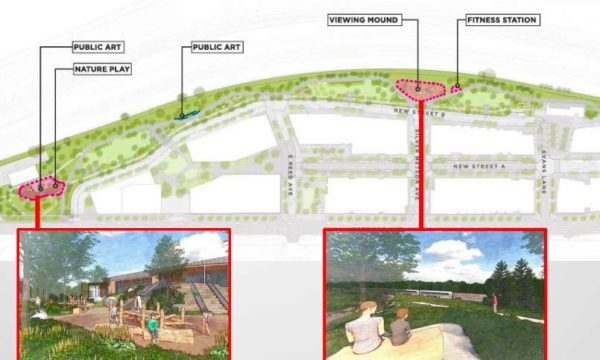 The planned park was mostly met with enthusiasm by Planning Commissioners.

“[This] is fundamentally one of the most powerful elements for the vision of Potomac Yard,” said Commissioner Stephen Koenig. “The southern portion, which has been part of the city for several years and has been a wonderful contribution to the development of the neighborhood, when it’s complete the park will stretch from Four Mile Run to where it connects at Braddock Road. I think this has been a fundamentally powerful conception aspect of Potomac Yard. It’s exciting to reach us with this culminating piece.”