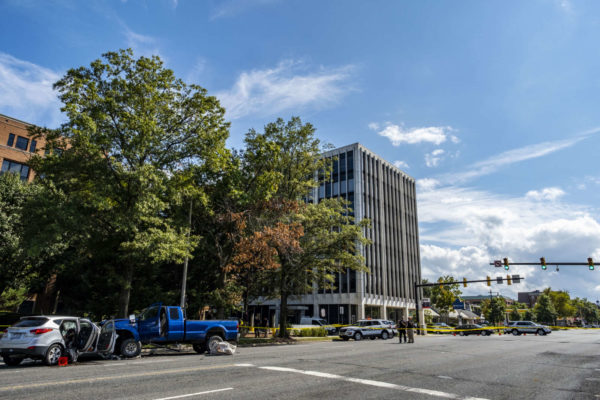 A 56-year-old man died after a crash in Old Town North on Tuesday, according to Alexandria Police.

Meigs Hodge died after being transported to the hospital, police reported on social media. Police did not say which car he was driving.

Hodge, a 1982 T.C. Williams High School graduate, was a musician and owned a landscape company in Alexandria for more than a decade. According to his LinkedIn page, his career included managing payroll for the Fairfax County Economic Development Authority, managing payroll for Octagon and managing human resources for RedPeg Marketing before launching his landscaping business in 2009.

The crash shut down N. Washington Street for a number of hours on Tuesday afternoon.

The crash reconstruction team are investigating the incident, and are asking that anyone with video or information regarding the crash to contact APD Officer Nancy Gordon at 571-289-6794.

The Alexandria Police Department is investigating a vehicle crash that occurred on Tuesday, September 29, 2020, in the…

END_OF_DOCUMENT_TOKEN_TO_BE_REPLACED

More Stories
Hank & Mitzi’s Executive Chef Wins on ‘Chopped’ Reality ShowAsk McEnearney: What is it Like Being a New Agent During COVID-19?