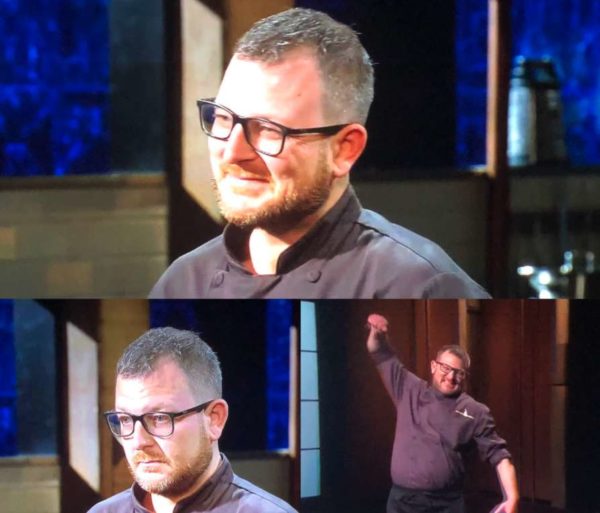 Edwards beat three other chefs for $10,000 and bragging rights, although the episode was taped in June 2019 and he had to keep his mouth shut about what happened for more than a year.

Edwards said that the pressure to perform on deadline was intense, but that he trusted his instincts.

“When you have 20 minutes to cook, you have to make a decision and go with your gut,” he said. “It is tough, but as a chef in the restaurant I can tweak things in the moment, but in that pressure cooker you can’t change direction. You have to go with the flow and I’m proud of what I did.”

The 43-year-old Edwards is a graduate of Johnson and Wales University, and cooked around the world before joining JL Restaurant Group, which owns Hank & Mitzi’s, in 2017. He lives in Woodbridge with his wife and two children.

Edwards said that appearing on a reality cooking show was always one of his aspirations.

“I always told myself that it was something I aspired to do,” he said. “I would really love to do it again, and even be back on Chopped.”

In recognition of the win, Hank & Mitzi’s (600 Montgomery Street in Old Town) is trying to capitalize off the publicity and is now open for lunch.

“We are expanding our hours,” Edwards said. “We’ve got great fresh food. I have a great team in here. We’re working hard.”

The show will air again tonight at 9 p.m.

So how does our Executive Chef Chris Edwards celebrate his big win on Food Network Chopped? By starting LUNCH SERVICE!…

Is this the face of a #chopped Winner? YOU BETCHA!!!!Congratulations to Chef Chris Edwards on his stellar win this evening…we are so happy for you and your well deserved win!!