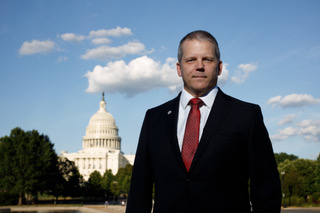 Jeff Jordan has his work cut out for him. The Republican supports President Donald Trump, and he’s running an uphill battle against Rep. Don Beyer for Virginia’s 8th Congressional District seat, which has remained solidly in Democratic hands for the last 30 years.

Jordan, a 50-year-old retired U.S. Army Major and counterintelligence officer, spends his days as a contractor for the U.S. Department of Defense. He says that his opponent is a socialist, and that a vote for him is a vote for Antifa and BLM.

“We must stand together and fight this tyranny,” Jordan told ALXnow. “That fight, here in the 8th District, is against my socialist opponent, Don Beyer. For perspective, the American Conservative Union has graded my opponent more liberal than Nancy Pelosi.”

Jordan had about $39,000 in his largely self-funded campaign as of June 6, as opposed to Beyer, who had $1.4 million. His strategy is to get Republican votes, in addition to middle-of-the-road and undecided voters. He has one debate set for October, he said, although the location and time are to be determined. Beyer decimated his last two opponents at the polls, winning 76% of the vote in 2018 and 69% in 2016.

Jordan said that Trump will make cringeworthy comments, but he believes in his intentions for the country. On the coronavirus, Jordan said Trump has made mistakes, but has tried his best to manage the situation.

“At the end of the day, I support the president for four words: ‘Promises made, promises kept,'” Jordan said. “He wants to see America win, and if you have to fight some of the battles he’s had to fight, it’s not going to be nice. If you look at his tactics from the business world in New York City, that’s a tough crowd. Does he say things that I cringe at? Sure, but I think he sometimes he does that on purpose to move someone’s focus from something substantial to something trivial.”

Jordan added, “My opponent has only been there six years, but the people leading the anti-Trump charge on the left have been there decades, but they are going to blame the man who is going in there to fix the problem, the man who came in there and raised Black and Hispanic employment numbers in record numbers.”

Jordan lives in Arlington, and retired from the military in 2014. He served multiple tours in Iraq, Afghanistan, South Korea, and said that he has spent decades monitoring the activities of collectivist regimes around the world.

“I see that happening here, and every night you turn on your TV and you see that people want to do away with our Constitution, with our way of government and with our way of life,” he said. “When I hear somebody say, ‘Let’s defund the police,’ that translates into my brain that they’re pro-Second Amendment. If you take away the police, who else is going to defend you?”

Posted by Jeff Jordan for Congress on Thursday, August 6, 2020