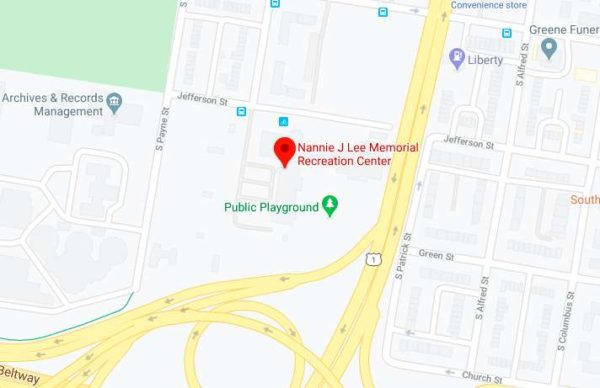 A case of coronavirus has canceled a summer camp at the Nannie J. Lee Memorial Recreation Center, and participants and parents have been asked to self-quarantine for two weeks and get tested.

J-Lynn Van Pelt recently received an email from administrators at the center advising parents that the therapeutic recreation summer camp, which was supposed to run from July 6 to August 14, would close on July 31. She then received a phone call from the Alexandria Health Department advising her on what to do.

“My main concern is that there’s been a large exposure with children, and no one knows about it in the community, which is important so that they can help keep their families safe,” said Van Pelt, whose 11-year-old daughter attended the camp. “A person from the health department called and told me that they were certain that everyone was exposed July 27, 28 and 29, and that we get tested. We have, and we’re waiting on the results.”

There were 44 campers and 15 staff members in the camp program, according to NBC4. 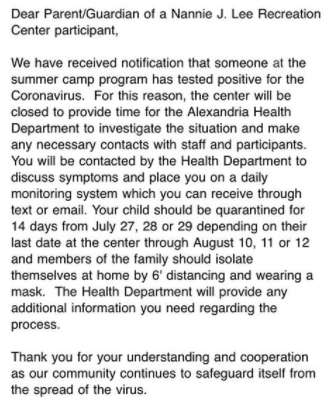 The city will not acknowledge that there was coronavirus at the camp, and city spokesman Craig Fifer said that there is not a public health need to know in this instance.

“When a person tests positive for COVID-19, their close contacts are identified and notified,” Fifer said. “There have only been two cases in Alexandria so far when it was necessary to notify the public because not all the close contacts could be identified.”

Those cases were in the initial stages of the virus in Alexandria, at Immanuel Chapel and Murphy’s Irish Pub.

Van Pelt said that staff at the recreation center have been professional, and that precautions were taken at the facility to keep safe her child. Still, she says that the community should be aware of the exposure.

“I feel like the community has the right to know,” she said. “I really think they did everything in their power to prevent this with tons of planning, but this disease is virulent, and it still got through. So, the larger question is why don’t why doesn’t the larger public know?”