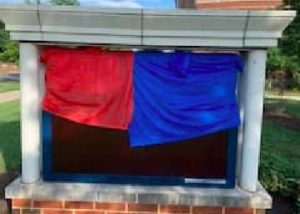 Students at T.C. Williams High School and city residents are placing a tarp over the school marquee every day to obscure the name until the school board votes to change it next spring.

“I don’t want to graduate from a school that is represented by a racist name,” T.C. rising senior Sarah Devendorf told ALXnow. “I don’t want to put it on my diploma, and it’s shameful because we are such a diverse liberal community.”

In a protest last week, students were told by ACPS officials that if they continued placing covers over the marquee that they would face legal action.

“The adult chaperones of the student protest were informed in advance that students would face no legal consequences, police involvement, or school disciplinary actions by holding their protest as they had notified the school in advance,” T.C. principal Peter Balas explained in an email to the community. “However, what actually transpired during the protest turned out to be different from what was discussed with the adult chaperones in advance. The chaperones and organizers had been advised that any action to cover the marquee could be seen as defacing public property.”

Protestors have continued to place covers over the marquee at various times of the day.

Balas also said that since Black Lives Matter protests have erupted throughout the city and country, that he, in fact, marched along with T.C. students in recent days in Old Town. He advised students to work through him should they want to organize another protest.

Earlier this month, the board unanimously voted to consider changing the name of T.C. by next spring. T.C. is the largest high school in Virginia and is named after former ACPS Superintendent Thomas Chambliss Williams, who was a segregationist and discouraged school integration.

The school is best known around the world for the 2000 movie Remember the Titans, which focused on its 1971 state championship-winning varsity football team that found greatness by working through racial adversity.