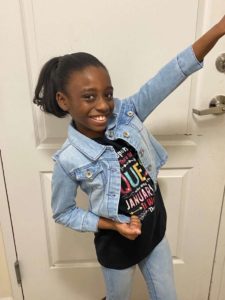 Sydney Robasson needs structure. The 10-year-old rising fifth grader at Samuel L. Tucker Elementary is used to waking up at the crack of dawn, and even with the summer break she’s tried to keep herself to as much of a regimented schedule as possible.

Like thousands of Alexandria City Public School Students, Robasson, who wants to be a doctor or lawyer when she grows up, has had to adapt. She’s learning in a house with her parents and Maxwell, her six-year-old brother. And although the school year officially ended in June, she is participating in summer school.

“Summer school is going well,” Robasson said. “We are relearning in summer school the things that we already have, and that’s because we don’t really have time to waste, and we need to have that fresh in our minds so that when we do get back to school we can get back to the things we need to.”

Her mother, Miss Robasson, said that her daughter was strict with herself on mimicking her school day.

“I would say the transition as an adult has been challenging, and I can imagine how it’s been for students,” the Miss Robasson said.

From March until the remainder of the school year, her daughter woke up at 6 a.m. and worked throughout the day.

While her summer schedule is not as rigid, she is still focusing for a number of hours every day.

Stacey Swickert is Robasson’s science teacher and has been at home in La Plata, Maryland, with three daughters and her husband while trying to teach more than 100 students. The nine-year veteran teacher at Tucker now has 30 students on her summer school roster, and works four days a week.

“Things are going on in the world that are very interesting to our kids, and they definitely want a place to go and be able to talk about them,” Swickert said. “I miss my students so much. There’s a synergy when you’re in the same room.”

“I have to make them like me, even if they don’t like science,” Swickert said. “For us, moving into summer was a natural progression to what we were already teaching.”

Robasson, whose favorite subject is social studies, wants to go back to school. She also hasn’t seen any of her friends since ACPS shut down on March 13.

“I’m lucky since I have my own email account, and we (she and her friends) can talk on Google Hangouts,” she said. “Being at home is annoying because my brother is annoying. He is mean.”

Summer school in Alexandria will end on July 31.