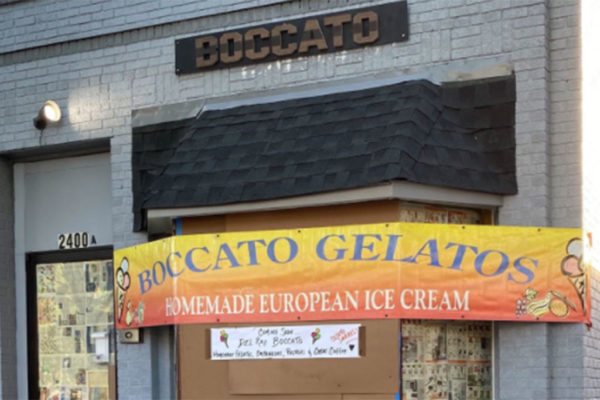 Cristian Velasco says he might be crazy, but even as other local businesses are closing, he’s still hoping to open a new gelato spot in Del Ray (2400 Mt. Vernon Avenue) by August.

“I got the permits going through last week,” Velasco said. “Some revisions are pending, I don’t know how long that will be, but I’m thinking maybe [we’ll open] by the end of August.”

It isn’t the first spot for Boccato Gelato, which had previously been located in Arlington.

Velasco said, like many local businesses, when he opens it will likely just be curbside pickup with a limited occupancy of between five or seven people allowed to stand inside.

“I feel like I need a psychiatrist,” Velasco said. “It’s definitely risky. But there are options to find spaces and availability. There are great locations available and the prices have gone down. It’s a risk.”

The equipment has already been moved into the new location, but Velasco said is concerned a second wave could shut down operations even as he prepares to gear up.

“I foresee possibly another shutdown so that’s going to be very challenging for established businesses and definitely for new businesses considering opening right now,” Velasco said. “It’s a huge challenge; kind of a personal dare.”

Still, Velasco said his comfort is that he doesn’t believe smaller locations like ice cream shops will be as heavily impacted as full restaurants. He’s also less worried about the prospect of opening in August, at the latter end of the warmer season.

“A lot of people need to go out for gelato in August,” Velasco said. “People do eat ice cream in the winter, and we’ll have to-go containers for pints and quarts.”

END_OF_DOCUMENT_TOKEN_TO_BE_REPLACED

More Stories
Ask McEnearney: Have You Wondered What It’s Like to be a Real Estate Agent?Alexandria Residents Ask Governor to Postpone Impending Evictions