After some back and forth about the “Old Town” letters, plans to revive the marquee above the former Old Town Theater are headed to the Alexandria Board of Architectural Review tonight (Wednesday).

The site at 815 1/2 King Street is undergoing renovation to turn into a Patagonia — an outdoors clothing and equipment store. The location was build as the Richmond Theater in 1914, according to a staff report, with a permit for “moving pictures, bowling alleys and billiards.” In 1929, a metal marquee was added, which may have been replaced or updated in the 1950s.

The distinctive “Old Town” sign wasn’t added until 1980, but staff had earlier nudged Patagonia towards keeping the sign intact. 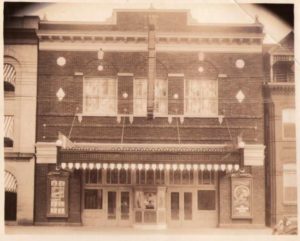 “While the ‘Old Town’ sign on top of the marquee was a later replacement for the ‘Richmond’ theater sign, it had been in place for a significant period of time and was embedded in the cultural memory and considered historic in its own right, so the previous owner was convinced to retain a slightly modified version of that sign,” staff said in the report. “Staff is pleased that the applicant has agreed to retain the culturally significant Old Town sign.”

Alexandria has fairly rigorous sign policies and an illuminated sign would typically be verboten, but staff said an exception should be made in this case for the Patagonia sign being installed.

“While internally illuminated individual letter signs are not typically approved in the historic districts, staff finds it appropriate in this location for a couple of reasons,” staff said in the report. “The theater has a history of BAR approved internally illuminated signs — starting with ‘Richmond’ in the 1950s and ‘Old Town’ in 1980. Furthermore, staff also supports the illuminated sign due to its location under the marquee because the canopy keeps the first floor of the building in shadow nearly all the time and the moderate illumination will identify the store entrance.”

The store itself is planned to open in September, according to Alexandria Living Magazine.

The former Old Town Theater isn’t the only King Street locale from the 1800s getting a touch up to be reviewed at the meeting tonight; a pair of buildings on upper King Street with could undergo a renovation to take them back to their pre-1950s design.

Insert photo via City of Alexandria