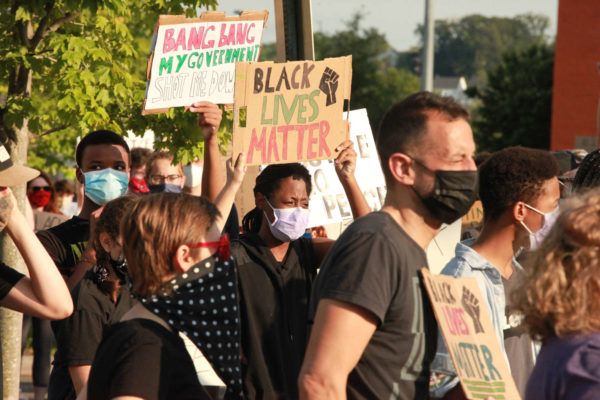 Kamryn Powell is tired of feeling scared when she goes outside in Alexandria. The T.C. Williams senior says that recent killings of black Americans at the hands of the police around the country have made her fearful for her safety.

Warner said he wanted to listen and learn, and that it is a frustrating time to be in Congress. He also criticized the president for ordering a recent use of force against protestors outside the White House.

“I used to be governor, but I’m also a fellow Alexandrian and I’m really proud of the voices I’ve heard tonight,” Warner said. “Our system doesn’t always work, God knows. I work in the U.S. Senate right now. I have to watch what happens down at the White House on a regular basis. I can assure you it is extraordinarily frustrating… when the President the United States uses tear gas to break up protesters so he could go over and hold a Bible in front of a church for a photo op. That is not who we are as Virginians, and Americans.”

Tucker said the average income for African American households is $55,800, which is well below the median family income of $118,000.

As previously reported, where you live in Alexandria can have an impact on your lifespan. According to a 2016 study, residents who lived in Seminary Hill neighborhood, for instance, received an average annual income of $187,000 and 95 percent of them have a college education. In the Beauregard area, the average income is $45,000 per year and only 72 percent have a college education. The life expectancy between residents living in the two areas is 84 years for Seminary Hill and 79 years in Beauregard.

Last Friday, Mayor Justin Wilson, who did not participate in the meeting, wrote an open letter on social media stating that Alexandria can honor George Floyd by tackling its own deep-seeded racial inequities in housing, health, wealth and education attainment and experiences with the criminal justice system. He also said that the city’s ongoing racial equity initiative will also help lawmakers make decisions with a focus on fairness.

“In many cases, (racial inequities) are actively perpetuated from a legacy from the past,” Wilson told ALXnow. “In some cases they are inadvertently perpetuated. For some we have active efforts to ease those inequities, in our Housing Master Plan, our Community Health Improvement Plan, our workforce development initiatives, the investments in early childhood education, after-school programs and post-secondary education achievement.”

“As a public official, I have a responsibility to acknowledge the racism that exists in the criminal justice system and to work with law enforcement leaders, local elected officials, and citizens to establish progressive policies and institutions and try to build bridges of trust with the community,” Porter wrote.

“I think that we need to start listening to this generation,” Hutchings said. “We have to own that schools are also contributing to systematic racism, from our policies, from our teaching, from our professionals who are employed in our schools, and for how we treat many of our students, particularly those who are black and brown.”

Facing Racism. Demanding Change. Join us to honor George Floyd and share your voice in a virtual town hall.

END_OF_DOCUMENT_TOKEN_TO_BE_REPLACED

More Stories
Alexandria Restaurants Adapt to New Standards as Pandemic Moves into SummerPoll: What Should Happen With the Former Confederate Statue Space in Old Town?