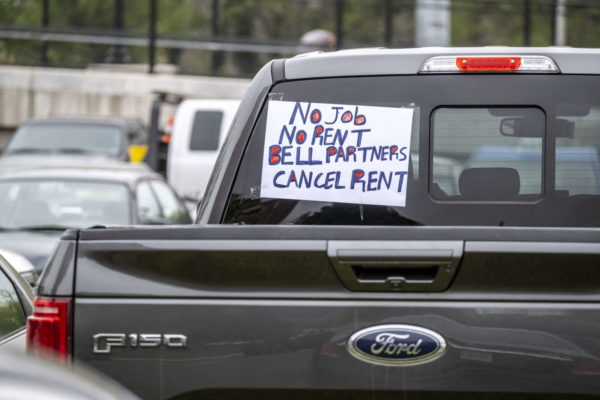 The City of Alexandria is working through a three-pronged approach to protect the city’s most vulnerable populations from the dire economic impact of COVID-19.

In a City Council meeting last night (Tuesday), the department heads who approached the city leadership at the April with an outline of their needs came back with plans on how to address housing challenges, food scarcity and keeping small businesses alive in the wake of the pandemic.

The plan is to use federal funding, estimated to total over $20 million, to address several COVID-19 related crises in the city. Federal regulations stipulate that these funds cannot be used to fill in other gaps in the city budget created by the pandemic. The initial trunch of money, City Manager Mark Jinks said, is only $13.9 million, but the city is expecting that to likely double over time.

Most of the discussion at the meeting centered on a new rental assistance program for low-income residents, which Housing Director Helen McIlvaine described as only slightly less challenging than a moonshot.

The program would provide $1,800 per household for up to three months, making up some but not all of the rent costs to low-income families. McIlvaine said those families would be identified by greatest need and least access to resources. The program, McIlvaine said, could be ready to go forward next week with the first round of applications ready to be rolled out immediately upon approval. Payments could start being made within two weeks.

The program would require informing both landlords and tenants of the rent payments to avoid fraud at either end.

Other stipulations, like the residents being required to be up-to-date on payments up to March. McIlvaine said the March rental period was identified as the start of when the pandemic began to impact jobs and businesses, so late rent payments after that period are ones most likely to have been caused by the pandemic.

McIlvaine said time is of the essence for the program, as there is growing anxiety about rent with residents passing the second month of bills due. Conflicts over rent have already led to a handful of protests in Alexandria.

“This is really exciting and I’m happy we’re able to do this,” said City Councilwoman Redella “Del” Pepper.

Kate Garvey, director of the Department of Community and Human Services, also briefly discussed the need for continuing programs like frozen food distribution and carts supplying food to concentrations of low-income families. Garvey also said her office has also been working to supply more household items and toiletries, which can be difficult to pay for and harder to find during the pandemic.

The other program that received major attention from the City Council at the meeting was a suite of plans by Stephanie Landrum, President and CEO of the Alexandria Economic Development Partnership, to reignite business in Alexandria once the pandemic is over.

“Think of this as a catapult,” Landrum said. “We’re trying to get businesses back to profitability.”

Landrum said the businesses in question employ people in the other programs supported by the city, so having those people back in jobs with a steady paycheck is something that could alleviate the strain on other support networks.

One of those proposals is a grant program, whose name is yet to be determined, that would help businesses that have had a negative revenue impact by at least 50% since the pandemic started. Landrum also said AEDP is looking for businesses that were sustainable and resilient before the pandemic so the program isn’t just paying off debt and closing out paychecks to employees, but funding businesses that can get back to thriving after the coronavirus pandemic.

Some on the City Council expressed concerns that the only businesses targeted by this sort of grant would be larger corporate entities, but Landrum said small mom and pop stores could also rank as sustainable and resilient.

“I do think this will leave out businesses,” said Councilman Mo Seifeldein, “and will leave out certain demographics, whether done purposely or inadvertently.”

Landrum said the aim of the parameters was to target businesses that are sustainable and will generate revenue, but that those restrictions could be adjusted as the program is finalized.

“We’re building the airplane while flying it,” Landrum said.

While the programs being reviewed by the City Council could have a positive impact on Alexandrians impacted by the pandemic, some said there were still areas being overlooked where there are still great needs.

“We have a lot of working families,” said Councilwoman Amy Jackson. “If we want businesses to reopen, we need to find a way to pay for child care.”

Mayor Justin Wilson said that though the solutions had their limits, it could go a long way towards making the case for more funding down the road.

“There is a skepticism that we can put this all to good use quickly,” Wilson said. “Even with the restrictions feds have put on us, I think we’ve identified, very quickly, some very good ways to spend this money and we’ll be able to make the case we’ve spent this well and we need a lot more.”