Alexandria is expecting to receive between $20-27 million dollars in federal CARES Act funding, but that comes with comes a few strings.

“All of that must be used for new expenses,” Mayor Justin Wilson said in a video town hall on Thursday night. “It cannot be used for any expense [that was] in the budget previously.”

Wilson said this adds a layer of difficulty for the city government, which is facing a dramatic loss of revenue and forcing the city manager to recommend cutting back some services and several larger plans.

Alexandria’s portion is expected to come out of $3.3 billion that has been allocated to the state to be redistributed at the local level. 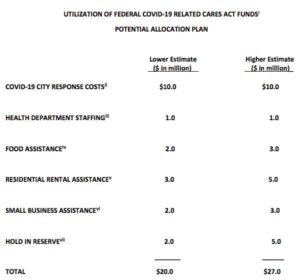 “We’ve learned some things that are good, a lot that is bad,” Wilson said.

Among the pieces of good news is that Virginia unemployment benefits, previously capped at $380 per week at one of the lowest rates in the country, is being extended for an additional $600 — bringing the annual total up to almost $52,000 for those currently unemployed.

The expansion also includes gig workers and certain contractors often excluded in other unemployment protections. Wilson said these new protections are part of recognizing that many people have been laid off through fault of their own and face difficulty in finding new jobs.

On Tuesday, the City Council will be discussing how to divide the federal funds.