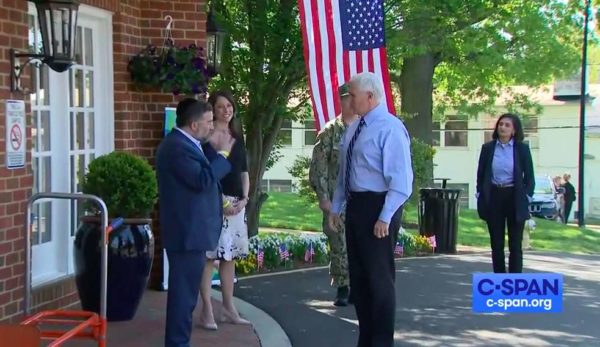 Vice President Mike Pence on Thursday delivered personal protective equipment to the Woodbine Rehabilitative and Health Center in Alexandria — the first installment of PPE that Pence says will be delivered to 15,400 nursing homes around the country.

Pence and his staff, in addition to Woodbine administrators, were not wearing protective face coverings for the visit and spoke within six feet of administrators. Pence did not step foot inside the facility, which has reported a number of symptomatic COVID-19 patients.

“The President wanted me to be here today to help deliver these gowns and gloves and supplies and it’s the first two installments that will be delivered literally around the country,” Pence said. “Early in the coronavirus epidemic, we recognized that the risk to seniors, particularly those with serious underlying health conditions, is very real.”

“We have a fabulous team inside and they work hard every day, not just during the coronavirus. They well deserve praise for everything that they’re doing, and we appreciate and are honored that you’ve come here today,” Shaw said.

Mayor Justin Wilson (D) told ALXnow that regardless of whether Pence wore a mask he appreciated the support.

“We are appreciative of any Federal assistance to support the PPE needs of our Long Term Care Facilities. They have been especially hard hit during this outbreak. We look forward to additional Federal assistance to expand testing, support the housing and food insecurity of our residents, keep our small businesses afloat and protect critical local government services.”

A large percentage of COVID-19 deaths in the city occurred at long-term care facilities, and three more deaths were reported today of women in their 80s who died of COVID-19.

The Centers for Disease Control and Prevention advise Americans to avoid close contact and to wear a protective face covering while outdoors.

The vice president has been widely criticized for recently visiting the Mayo Clinic without wearing a cloth face covering. On Sunday, Pence said that he should have worn a mask, according to CNN.

“With today’s visit, our heroes on the frontlines are getting a photo-op instead of meaningful efforts to produce and deliver the proper safety equipment they need to combat this pandemic. Now, months into this crisis, nurses still say access to PPE is ‘sporadic.’ With Joe Biden as President, our frontline workers won’t have to worry about getting the supplies they need to stay safe and save lives.”

The Biden campaign also released comments from Virginia’s Democratic Congressional delegation, which severely criticized the Trump administration for its attempt to overturn the Affordable Care Act in the Supreme Court.

“Countless families in Northern Virginia rely on the Affordable Care Act — either directly for their care or indirectly through the protections it grants for younger Virginians and Virginians with pre-existing conditions,” Northern Virginia Congressman Don Beyer (D-8th) stated. “It should not need to be said, but apparently it does: the height of a global pandemic is when our leaders should be expanding our access to health care, not seeking to rip it away. President Trump should end this reckless lawsuit.”