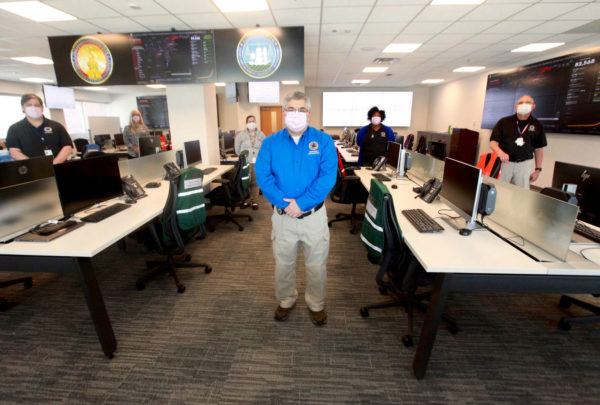 Ray Whatley, the city’s acting emergency manager, is operating the EOC with a skeleton crew of four full-time staff in the Public Safety Building at 2003 Mill Road. The EOC remains pivotal during the city’s first bonafide emergency since the facility opened last year.

“I’ve got a team of folks helping to coordinate and communicate with all the city agencies,” Whatley said. “We help join the entire city, through the various leaders of the departments to help make it run. We do our best to effectively communicate and collaborate and bring consensus to everybody so that way, we are all on the same page.”

Alexandria’s 911 operators are currently working from the city’s main dispatch center at Police Department headquarters, a backup center located at the EOC, and at home.

“Some people are at home taking calls and we’ve never done that before. It’s way out of the box,” said Marietta Robinson, the Department of Emergency and Customer Communications representative in the EOC. “Some are downstairs in our backup center. Some are completely locked down in the main center, like they just live there. They’re not going home. They’re taking their showers there, they’ve got a washer and dryer. They’re just living there for two weeks.”

There has been one COVID-19-related death in Alexandria, and there are currently 149 cases in the city.

In a normal emergency, such as a hurricane, the EOC would be completely full of more than 50 essential staff from various departments across the city working up to 12 hours a day — divided up by color-coded chairs. The state-of-the-art facility includes large flat-screen TVs with the latest COVID-19 figures in Virginia, the U.S. and around the world. In order to get into the EOC, an ALXnow reporter had his temperature checked when he got to the building (it was 98.2 degrees), and was asked if he had been on international travel, had a sore throat or shortness of breath.

Now, however, Whatley oversees a daily 10 a.m. conference call with more than 100 city leaders and staff, including representatives from the city manager’s office, the health department, the Department of Community and Human Services and the fire department.

“We’ve also worked with our judicial partners in lowering the jail population,” Whatley said. “We’ve been helping with traffic control and safety, and security at different food distribution points.”

The city has about 1,200 full time employees from all departments working in various capacities throughout the crisis, Whatley said. He is also awaiting a shipment of personal protective equipment from the Virginia Department of Health, and said that the city is managing its stockpile and has been approved by the city manager to buy more if necessary.

The EOC was activated in mid-March, before the city made its emergency declaration. The facility remains functional, but highly unused due to the risk of contagion, which has an effect on the timeliness of work being done. At the same time, since employees are working in silos, work is being carried out with limited distractions from other tasks, Whatley said.

“We’re so used to being able to walk over tap somebody on the shoulder and get something done,” Whatley said. “Now it’s send an email, leave a message, wait, they call you back, then you have that discussion. So, there’s that uncomfortable pause, and that can be a couple minutes to a couple hours. Now, if it’s an urgent matter, of course, we’ll get in touch with somebody.”

Still, he added, “Because of the whole social distancing piece, people are apart… They actually have the ability to concentrate a little bit more on what they’re doing.”

Whatley has worked as a paramedic and EMS supervisor in the city since 1991, and was promoted to the acting position last month. He previously served nearly four years as the assistant emergency manager under Fire Chief Corey Smedley, who was the city’s Homeland Security and Emergency Manager before being promoted to his current post.

Whatley likened the role of the EOC as the center of a bicycle wheel holding holds together the spokes of a tire, which is the city government.

“This is truly unprecedented territory,” he said. “It really is predicated on a couple things — facilities shutting down, people limiting their exposure, people staying home and maintaining that social distance. As long as we continue to do those things we have a better chance to flatten that curve so that we’re not getting more and more cases spiking.”

END_OF_DOCUMENT_TOKEN_TO_BE_REPLACED

More Stories
Open Houses in Alexandria This WeekendLetter to the Editor: ALIVE! Thanks Alexandria for Overwhelming Response