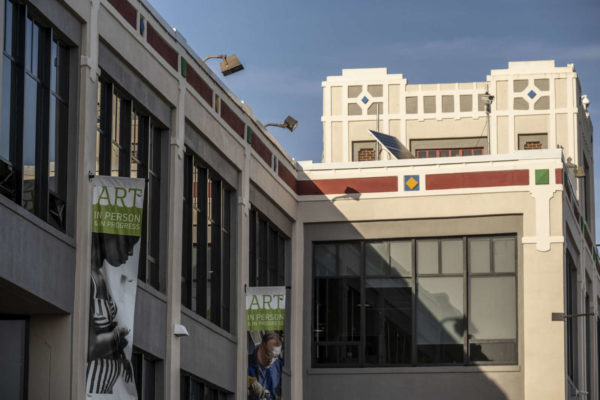 While other public locations are closing across town due to coronavirus concerns, the Torpedo Factory Art Center remains open — though not without some degree of controversy across social media.

While the galleries are open, many of the artist studios may be empty after the city and the Torpedo Factory Artists Association (TFAA) said that artists concerned about their health were encouraged to close their studios for the time being.

“We all love art, but we love our artists, their families and our great community more,” the organization said on an Instagram post. “Many artists applied for hardship leave and the length of their absence will depend upon this fluid and evolving situation.”

The Art League, which runs an exhibit space and classes in the Torpedo Factory, announced earlier this week that it will be shutting down classes, galleries and workshops until mid-April.

It seems to be a satisfactory conclusion to a minor rekindling of some long-simmering bitterness between the TFAA and the City of Alexandria.

The City of Alexandria has given the directive that Torpedo Factory artists are to keep their studios open amid the current public health crisis or risk losing their leases in the fall. Artists who fall into one of the high-risk categories or who are caregivers for a high-risk individual are permitted to request a special hardship exeption that will be reviewed and granted on a case-by-case basis. As independent small business owners, many of us are making difficult deisions right now that have the potential to impact our health, our community, our families and our livelihoods.

The post was later deleted, but other posts were flooded by commenters who had seen the message and were concerned. Talk about the city forcing artists to stay in their booths even made its way to the Seminary Road Facebook group.

“Artists at the Torpedo Factory are feeling pressured to man the studios under the threat of expulsion when their contracts are up in November!!!!” one commenter said. “Many of the artists there are high risk! Over 60 and with underlying serious health problems! Why is the art center even open?????”

But Craig Fifer, a spokesperson for the City of Alexandria, said point-blank that the city was not pressuring artists into keeping their studios open and that leaving would not put their leases at risk.

“The City has not mandated that artists maintain their studio hours or risk losing their leases in the fall,” Fifer said in an email. “The safety and well-being of the artists, staff members and visitors is our highest priority.”

Fifer explained that the Alexandria Health Department was not recommending requiring that the Torpedo Factory close because it would put the livelihood at risk for the 160 artists working there — though Fifer said if the pandemic spreads it could be forced to close anyway.

Fifer also said the size of the art center means that it can be visited while still allowing for adequate social distancing and minimizing spread of infection. While two people in Alexandria have been diagnosed with COVID-19, Fifer said there’s currently no evidence of community transmission in Alexandria. Those experiencing coughing and sneezing are still encouraged to remain home.

“The studio lease offers a provision for all tenants, not just those in high-risk categories or caregivers, to allow for unforeseen hardships or unusual circumstances,” Fifer said. “The only requirement is that artists make a written request to alert staff of their leave. They do not have to provide an explanation for the hardship request. Hours missed during this hardship period do not have to be made up to meet the annual hours requirement.”

Emails shared with ALXnow between the TFAA president and city staff show that the TFAA was aware of the policy on Friday morning.

“Each artist studio has an individual lease with the Art Center/City,” Brett John Johnson, Director of the Torpedo Factory Art Center, said in an email. “Therefore, we just need to hear from them individually as we have been doing. In this situation, we are not denying people the right to close studio or gallery when requested.”

ALXnow reached out to the TFAA but received no response. In a comment on the most recent post from the TFAA Instagram account, the organization said “we advocated for ourselves and were able to change the situation. Stay healthy!”