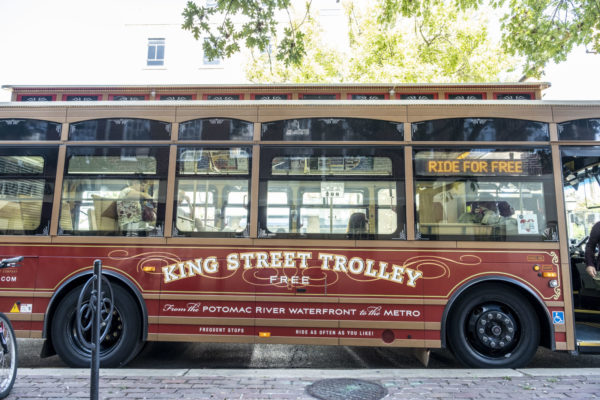 “The 2030 and 2022 Vision Plan Networks include the King Street Trolley with a potential extension from the King Street Metro to the Eisenhower Metro Station via the Carlyle and Eisenhower East districts,” the plan said. “This could provide a frequent connection directly between the large and dense activity center around Eisenhower Avenue Metro and Old Town.”

Proposed changes also include longer hours for the trolley. Currently, the trolley starts running at 10:30 or 11 a.m. on a 10-15 minute loop. The plan noted that this service means the trolley is not available for morning commuters, early shift workers, or others coming into Old Town before 10:30 a.m.

“The revised King Street Trolley also would operate with more traditional operating hours, including morning service,” the study said. “It should be noted, however, that due to the funding arrangement for the operation of the King Street Trolley, any potential changes to the trolley would require additional coordination and approval by City Council.”

The extension of the King Street Trolley is included in the longer-term goals for the project, with implementation planned by 2030.

The trolley is funded by hotel tax revenues from across the city, though the transit survey noted the current benefits are mostly confined to Old Town. The revised route would run through a neighborhood slated for extensive residential and commercial redevelopment.

“This raises an issue about the fairness of funding a free route in one part of the city that is paid for from hotel taxes across the entire city,” the study said. “[One option] would require fares on all routes, including the King Street Trolley. To offset the impact of this change on tourists and visitors, DASH could provide free passes to Visit Alexandria for all Alexandria hotels and other tourism entities.”

The plan does not make any recommendations for a fare policy.

The plan was adopted by the Alexandria Transit Company — which operates DASH and the King Street Trolley — in December. The Transit Vision Plan was presented to the City Council on Feb. 25 as an update. Implementation of the plan’s suggestions is scheduled to be considered next year as part of the Fiscal Year 2022 budget.