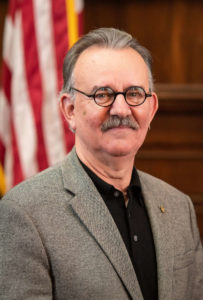 Cox said he doesn’t design most of the buildings first hand but works on the government side to facilitate discussions with a team — from architects to designers to land use attorneys — about how a building’s architecture does or doesn’t fit in with the others around it.

One of the best examples of that, Cox said, is the new Old Dominion Boat Club on the Waterfront. The building replaced The Beachcomber Restaurant, a beloved building from 1945 that had once been a restaurant but had since fallen into disrepair. The city’s threat of eminent domain clouded much of the early discussion around the new building, but Cox said in a survey of favorite buildings constructed within the last decade, the new Old Dominion Boat Club came out on top.

“The reason I think it resonated is because its avowedly and starkly modern, but the scale is right, the material is right, and even though they had to demolish the old Beachcomber building, the architect replicated the scale, the projecting balconies and the flat roof terrace,” Cox said. “The cultural memory was preserved even though in that case the building was gone… The fact that you can incorporate that into an architecture that most people don’t even notice or know, but subconsciously if you lived here, you know it fits. That’s part of what I’m most proud of.”

They weren’t all winners, though. As he goes around Alexandria, Cox says some buildings make him proud, and others are still nightmares. The one that stands out the most is Washington Square, a project by Saul Centers. Cox was quick to note that it wasn’t the fault of the architect, Shalom Baranes, who also did projects like The Oronoco and Robinson Landing which Cox regards as very good projects.

“Shalom could have done a better building but the developer wanted every square inch,” Cox said. “It’s not ugly, but it could have been better. It met the zoning ordinance, but that’s only one criterion. Shalom is a brilliant designer and great architect and he could sell refrigerators to the Eskimos, and managed to sell it to the community.”

But once it was built, Cox said the community realized the building was bigger than they’d envisioned from the designs. The end result was new standards for building on Washington Street, so despite not having great affection for the building itself, Cox said it was ultimately a good thing that it helped get the guidelines changed.

In other scenarios, it wasn’t what was built that Cox lamented, but what was lost. He said Alexandria used to be dotted by small, two-story brick administrative buildings constructed in the early 20th century that couldn’t survive new development and didn’t get the respect Cox felt they deserved as pieces of the Old Town architectural landscape.

“The building I was most sorry to lose in my 30 years here was the old Ford plant on S. Union Street,” Cox said. “It was [designed] by Albert Kahn, who was internationally famous and pioneered industrial buildings.”

Where early Ford plants had to be designed with tall windows to let light in, Kahn took advantage of new skylight technology and redesigning around electricity to make long, horizontal buildings .

“That was a revolution,” Cox said. “[Kahn] built a beautiful art deco facade facing river because that’s how cars arrived and how dealers arrived near Jones Point Park, where Ford’s landing is today.”

Unfortunately, the building was built on untreated pine pilings that all rotted, which made saving the building cost-prohibitive.

“We had to just say goodbye,” Cox said. “We have the tech to save anything, but sometimes with historic buildings, it just isn’t feasible.”

While most of Cox’s work has been in Old Town, one of the biggest preservation wins Cox says the city was able to get was saving the historic chapel, built in 1823, at the Virginia Theological Seminary.

“When that burned, the church immediately went into the replacement process,” Cox said. “The little chapel was much beloved by the school and alumni but it was too small. When it burned, the roof was completely gone but the walls were generally stable.”

The seminary originally wanted to demolish the building, but the city was able to push back and devise a process to stabilize the walls like the ruins in European countries Cox had spent his youth studying.

“We were able to make it a memorial prayer garden where people can come, scatter ashes, or have weddings,” Cox said. “Next to it was where the new chapel was built. I think that was a win-win.”

For the next historic preservation manager, Cox said the work will be much the same as it’s been for him, but with a continual crop of new people to guide.

“The most important thing [for the next person] will be continued outreach and education,” Cox said. “50% of people move every five years. You have to continue to explain to newcomers who bought here because it’s only two stops from the Pentagon or D.C. — for all of those reasons, Alexandria is a wonderful place to live, but they don’t know about historic buildings and architecture, so you have to keep teaching it.”

Cox will continue to stay in Alexandria, working on his own home projects and surveying the Old and Historic District.

“There are lots of things I want to do,” Cox said “but mostly I want to be able to walk down King Street without thinking about sign violations or go to Misha’s without people running up to me asking about [some new] regulation.”

Photo via Richard Lawrence/City of Alexandria