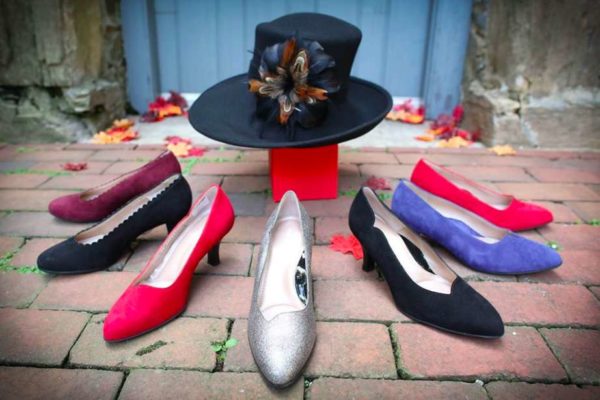 Feeling tired and achy? You might be wearing the wrong shoes.

For the last 27 years, Comfort One Shoes has eased the pain of customers in locations throughout the region by offering more than 100 comfort brands like Mephisto, Beautifeel, Ecco and Dansko. The company’s 15 locations employ more than 100 employees, and it all started at 201 King Street.

The company’s Chairman of the Board Maurice Breton founded Comfort One when he was 39 years old. Back then, it was just an 800 square-foot storefront, and Breton left a cushy job as vice president of the Norfolk-based Hofheimer Shoes to start his own company.

The idea for the new company started when Breton received a gift from a colleague — a pair of unattractive Ecco dress shoes from Denmark.

“I opened the box, I looked at the shoes, I closed the box and I thanked him very much,” said Breton, who has about 60 shoes in his personal collection. “And at that time, we were experimenting with casual Fridays, and that day was a Thursday. The next day I put the shoes on and wore them all day. I wore them all weekend and said, ‘Wow! These are not like any of my other shoes.’ And, of course, they were European with European fittings, and they fit differently. They cushioned shock, which, in turn took off pressure on my ankles, knees and hips.”

Breton’s first lesson on the job was that he didn’t know as much as he thought about running a shoe store.

“I figured, geez, I’ve opened 50 stores in my time in retail,” Breton said. “Well, I never really opened them. I picked the location, bought the shoes, maybe, and everybody else did the work.”

Within five years the company, now headquartered in Manassas, had seven stores, including one of its most successful locations in Dupont Circle.

Breton’s youngest of two son’s, Garrett, was named the company’s president in November, taking over for his father. He now works in an office above the company’s second Old Town location at 200 King Street – directly across the street from its flagship store. Garrett Breton started working for the company when he was a teenager attending Bishop Ireton High School.

“Once I was in high school, I got a work permit and I started doing stock work and cleaning,” he said.

Garrett said that online business is dominating the marketplace and that it is slowing the growth of brick and mortars. That stagnation opens opportunities for Comfort One to absorb older shoe stores, he said, like in 2018 with the Shoe’s For Comfort at Leisure World Plaza in Silver Spring, Md.

“We bring unique shoes that no one else has from factories all over the world,” Breton said. “We’ve been approached by multiple people, as the baby boomers are kind of aging. They’re sort of at the end of their life cycle on their stores. It’s getting harder because the internet and other things are biting into their core businesses.”

Garrett said that many department stores carry brands with fixed prices, which results in poorer quality shoes over time. The average price of a pair of shoes at Comfort One is $186, he says, and prices can range from $90 to $400.

“Speaking broadly, most shoe companies have to maintain their price point,” he said. “So you have a comfort brand like Rockport, and their shoes were $100, which was really expensive in the 1980s. And then you have a big customer like Macy’s, and they say, ‘Well, it’s got to be $99.99,’ and each year the price in the leather and the sole go up a little bit, shipping goes up and they really need to be $120 to maintain quality, and they decide to keep them at $100. So, they pull up the leather out of the liner and make the cushioning a little worse. And then the next year, it’s another 5% worse. They might maintain the $99.99 price point, but the shoes are not nearly as good as something that was made in Portugal by hand by a company trying to make them as comfortable as possible.”

A big seller for the company is Dansko, the Danish clog company that is extremely popular with people who work in hospitals and stand and walk all day. The shoes have leather uppers and a rigid polyurethane “rocker bottom” sole with top-notch arch support.

However, these days the brick-and-mortar stores are more focused on attracting impulse-buy customers from out of town or on a lunch break as opposed to catering to customers who need comfortable shoes for their jobs.

“We have to find innovative, fresh, fun shoes that people want to buy when they’re walking by, and in Old Town because they came for brunch and they see a shoe that they love in the window and they want to come in and try it. That’s what our business is more now,” Garrett said.

Maurice Breton said that a secret to his success is having a vision of what he wants.

“I think that I have a definite vision for what I want to do and try and rally the troops around it,” Breton told ALXnow. “We have multiple locations, and the company does everything from having a mini-construction department to selling high-end shoes to merchandising and buying. Additionally, these leases and purchases and renovations of stores — there’s just a whole bunch of things that need to be coordinated. So, hey, I have no apologies. I do what I do, and I do it as well as I can, and I think that the results speak for themselves.”

Photo via Comfort One Shoes/Facebook