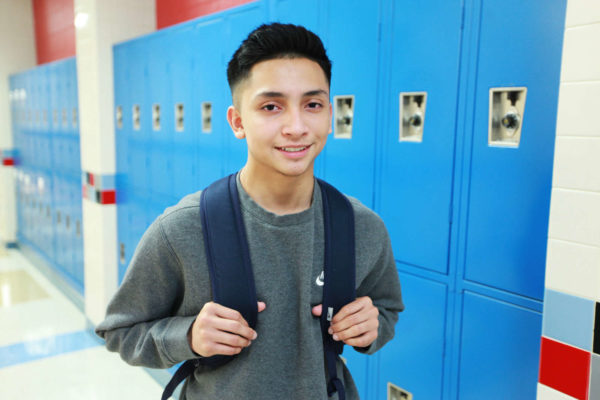 Wilmer Carranza hardly spoke a word of English when he moved back to Alexandria from El Salvador in 2009. Now the 17-year-old senior at T.C. Williams High School has a 3.999 grade point average, is a student representative on the Alexandria School Board and recently received a $250,000 scholarship to attend Lafayette College in northern Pennsylvania.

Carranza is the first member of his family to go to college and credits his success to his mother, friends and the Alexandria public school system.

“Now I get to start a new legacy,” Carranza told ALXnow. “Now my children after me and their children after them — I hope they all start to go to college and get the education that I was able to get. So, that’s something that I’d love to see and would want that to happen with my family.”

“Wilmer is absolutely wonderful. We’re all so proud of him,” Balas said. “The only time he’s called into the office is when we want to discuss with him what’s going on with the school board, what he thinks should be going on here at the school and other wonderful contributions.”

Carranza was born in Alexandria, and moved to El Salvador at an early age with his mother, Reina Carranza, to live with his father and three older siblings. Three years later, the pair returned to Alexandria and young Carranza was enrolled in second grade at Mount Vernon Community School. It took him about six months to get a handle on the English language, which was a frustrating process, he said.

“It was terrifying. I used to cry every day,” Carranza said. “It was something I wasn’t used to, and I literally had no idea what was going on. Whenever my teacher asked me any questions or to do something, I didn’t understand.”

Carranza enrolled in the Advanced Via Individual Determination program when he was a seventh-grader at George Washington Middle School.

“They were the ones that started my progress to develop my skills and my character into having to be prepared for college,” he said. “They’ve been there for… every educational decision I made, so they’re a major part of my life for this college process.”

Fast forward to three months ago: Just before the winter break, Carranza was hanging out with friends at a Safeway in Alexandria when he got the call telling him that he’d received the $250,000 Posse Foundation scholarship. After three rounds of interviews and an intense application process, Carranza didn’t believe that he was capable of getting such an award.

“At first I was speechless,” he said. “We were about to go home, go to the DASH bus and I got the call. I told everyone else and they were all screaming at me because they were all happy for me and they started recording me and put it on Snapchat. So, that was something amazing. I didn’t even think I could get a scholarship like this, and then once I got the call it made me realize that I can do more than I think I can.”

Carranza says he wants to study computer science at Lafayette. He also dabbles in graphic design, and last year won a school competition to design the ticket for the T.C. prom.

After getting home, Carranza broke the good news to his mom, who is a housekeeper at a hotel in the city.

“I told her that it’s a quarter-million dollars and then she started freaking out. I told her that she doesn’t have to worry about paying anything, not any cent because I’ll get that covered,” he said. “There is not really anything that I can give her to make up for all the hard work that she’s done, except relieve the stress from her back and not worry about me as much as she has in the past by like working double shifts all day and night. I just want her to relax and enjoy life.”