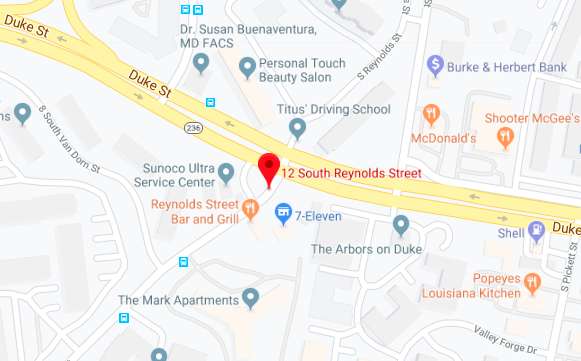 (Updated at 9 a.m.) There are no reported victims of a Tuesday afternoon shooting in a parking lot in the Landmark area, according to Alexandria Police Chief Michael Brown.

“It appears that nobody was hit,” Brown told ALXnow on Tuesday night. “There may be a vehicle involved, but we’re still investigating,”

Shortly after 4 p.m., police received numerous 911 calls reporting shots fired. Investigators found shell casings in a parking lot on S. Reynolds Street near Duke Street, and there was reportedly one bullet hole found on a vehicle.

The shooting occurred near a number of apartment and condo buildings, as well as some businesses, including a 7-Eleven, Landmark Auto Group and a Sunoco Ultra Service Center.

George Alexis, the bartender at Reynolds Street Bar and Grill (34 S Reynolds St.), arrived at work to find police combing the area. He said that the shooting occurred outside an apartment building.

“I actually rolled up after all the cops showed up. A few customers couldn’t get into the building where the shooting was — they lived there,” Alexis said. “We saw cops digging through dumpsters and stuff. I saw a guy walk out of the woods, but he didn’t look suspicious.”