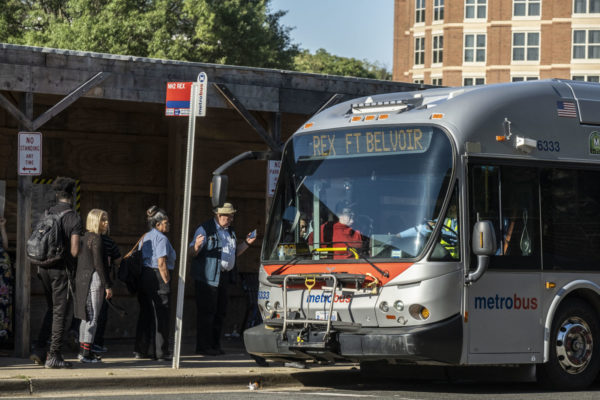 While Alexandria’s Transportation Commission endorsed a WMATA-backed plan to overhaul the region’s bus system, that approval was accompanied by concerns that the project won’t be able to achieve its lofty goals.

The plan would impact both regional bus lines, like Metrobus, and local bus systems, like DASH. It lays out aims for improving the bus system that frequently overlap with the city’s own plans to overhaul the DASH bus network.

The top four recommendations are vague, but the 20-page summary gives each a little more context:

Part of the implementation of the plan, a representative of the project said to the Transportation Commission at a meeting last week, is a regional task force that could monitor progress on the milestones and report annually on whether those are advancing.

Melissa McMahon, chair of the Transportation Commission, said those reports will need to identify advances not just regionally, but by individual localities.

“There could be really wide gaps between one jurisdiction and another,” McMahon said. “That could really hold this up… some of the things you’re describing require everyone to move on together.”

A draft strategic plan was released last year and to an extent, the plan already includes information on individual progress within bus networks. In the section titled “advance technology and programs that improve the safety of everyone on board,” the plan notes that DASH has security cameras installed on roughly 20% of the fleet.

Overall, members of the Transportation Commission were hopeful the plan will help to reform the bus network and make it a viable supplement to rail transit.

“Buses are the historically ugly stepchildren of the transit system,” McMahon said. “They don’t have the same flash as other kinds of transit. They don’t have the same permanence that rail does… but if the Metrorail is our backbone, the bus is our nervous system and capillaries. It’s circulating everywhere in our community. So it’s really important that we get this right.”