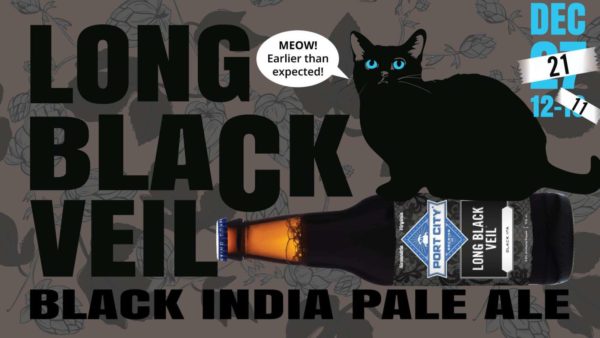 Port City Brewing Company is preparing to re-launch an ale celebrating one of Alexandria’s most enduring mysteries.

Long Black Veil, a black India pale ale, is a spooky black beer inspired by the legend of the Female Stranger.

As the story goes, a young woman had fallen ill on a ship and was brought ashore in 1816. A man never removed her long black veil as he brought her to Gadsby’s Tavern to be treated. The doctor and nurses were sworn to secrecy as they treated her, but after two months, she died in his arms. She was buried at the edge of Old Town, where the grave of the “Female Stranger” remains to this day.

The beer was originally introduced in 2014 to coincide with the anniversary of the death of the Female Stranger. This year, the beer will be introduced at the brewery’s longest night of the year celebration on Saturday, Dec. 21 at the brewery (3950 Wheeler Avenue).

The festivities are scheduled to start around noon, but in a Facebook post Port City said most of the live music and beer tappings will be held in the evening.

“Long Black Veil is jet black with a tan head,” Port City said of the brew. “Piney, citrusy hops burst from the inky depths to mingle with notes of coffee and dark chocolate.”

The event is scheduled to include food trucks DC Slices and The Frenchman Food Truck and a pop-up of Daddy G’s Craft Salsas.