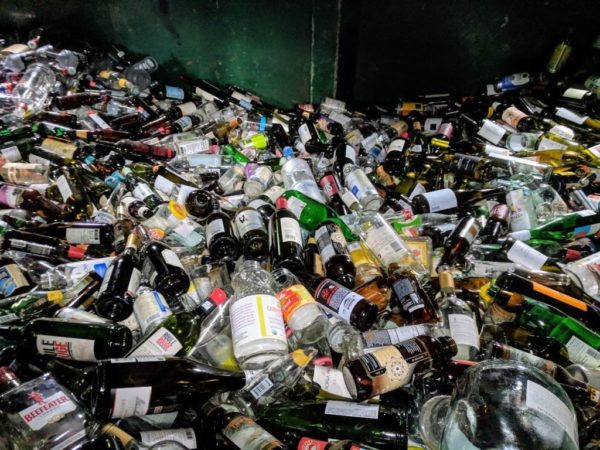 Last week it was announced that Alexandria would follow in the footsteps of neighboring jurisdictions in discontinuing curbside glass collection in recycling bins.

Glass will still be recycled and reused, but only if you drop it off at a designated collection bin. Otherwise, starting Jan. 15 glass will go into the trash and wind up where it had been going anyhow, since China closed its doors to the world’s refuse and the market for glass recycling evaporated: a landfill.

On Twitter, Mayor Justin Wilson pushed back on the suggestion that there is much the city could do to keep recycling curbside-collected glass, given the realities of the recycling market in the U.S., but left open the possibility of restoring curbside glass recycling in the future.

Part of the problem with collecting glass in curbside bins with other recyclables is that sorting it is difficult, compounded by the fact that glass shatters, contaminating the other recyclable materials. That raises the costs of recycling overall. Plus, recycling glass into new bottles and glass products is one of the least efficient and environmentally-positive forms of recycling, limiting the upside.

There are, however, options for reusing and recycling glass. Glass bottles could be collected, washed and reused, though that also has tradeoffs. Glass can be crushed and turned into construction material — as the city is doing with the drop-off bins. And glass that’s collected by itself in glass-only curbside bins is more viable for recycling — though that comes with increased collection costs and is less convenient for residents.

Do you agree or disagree with the city’s glass recycling decision and, if given the option, would you pay more to have glass recycled in the future?