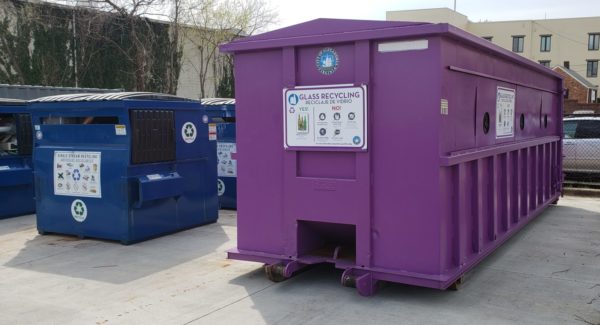 (Updated at 11:50 a.m.) Alexandria will no longer collect glass curbside for recycling, starting next year.

Starting Jan. 15, if you’re hoping to get your glass recycled rather than just tossed out with the trash, you’ll have to take it down to the purple bins at one of four facilities in southern Alexandria.

According to the city, glass recycling can be dropped off at:

Only glass bottles and jars — of any color — can be dropped off, though they have to be emptied and rinsed first. The change reflects the reality that single-stream recycling of glass is no longer feasible from an economic and environmental standpoint.

“Currently, glass collected for recycling by our contractors is ending up in landfills due to a variety of issues, including recycling contamination, rising recycling costs, and lack of a regional glass processing capacity,” the city said.

For residents who don’t want to take a trip to the big bins, glass should be tossed out in the trash starting Jan. 15.

After China stopped accepting some recyclable materials from the United States, the cost of recycling in the United States skyrocketed and left localities nationwide grappling with what to do with costly waste.

Alexandria is just the latest locality to ditch glass. Arlington County eliminated glass recycling in April, though like Alexandria several locations were designated as drop-off locations to be sent to Fairfax County, where the glass is crushed and used in road and other projects. Prior to the change, Arlington said, glass placed in curbside recycling bins was just being sorted and ultimately sent to landfills — not recycled.

The City is actively monitoring the market for a viable option to recycle glass and working with our neighbors to propose and advocate for innovative solutions. While glass is still accepted in the blue recycling bin, the City has partnered with Fairfax County and established four drop-off centers to improve the recyclability of glass. Glass separated at these centers will be hauled to a processing plant in Fairfax County to be recycled into gravel and sand that can be used locally. These end products can be used in landscaping, construction projects, and even remanufactured into new glass items.

On Twitter, some residents were upset with the announcement from Mayor Justin Wilson last night, though the mayor pushed back on the assertion that Alexandria can do much to solve the larger glass recycling problem. Still, curbside glass collection could eventually be restored, Wilson said.

Unfortunately the international recycling markets are very much out of the City’s control. We have partnered with Fairfax and Arlington to develop some glass recycling options. If this works, we will explore whether we can restore curbside collection in the future.