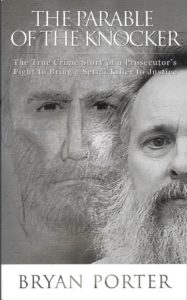 Alexandria’s Commonwealth’s Attorney is headed to Port City tonight to talk about the hunt for Alexandria serial killer Charles Severance.

The author talk focuses on Bryan Porter’s book The Parable of the Knocker, the behind-the-scenes story released earlier this year about the investigation, prosecution and trial of Severance. He was ultimately convicted of the murders of Nancy Dunning in 2003, Ronald Kirby in 2013 and Ruthanne Lodato in 2014.

For years, the mystery of Dunning’s murder threw a shadow over the community, and Porter’s book looks at the work investigators did to connect the 2003 killing to the two in 2013 and 2014.

According to the event description, Porter will also discuss insight into the psychological profile of the serial killer that Porter describes in the book as emerging out of Severance’s journals.

In those journals, Severance expressed anger over a child custody dispute and directed that anger towards local government. All of the victims were, in some form, connected to local government, but Porter said in the book it’s more likely that they were picked for living in an affluent neighborhood rather than individually targeted.

The book talk is scheduled to be held at Port City Brewing Company at 3950 Wheeler Avenue from 6-8:30 p.m. tonight (Wednesday). The event is free and those who register and attend will receive a free pint, according to the event description.