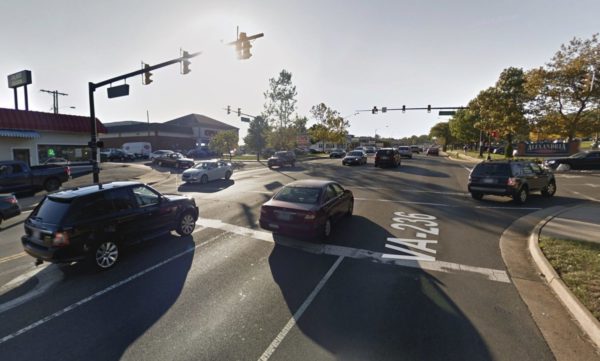 A 77-year-old Fairfax County man was struck and killed by a driver on Duke Street near the Alexandria Commons shopping center over the weekend.

The crash happened around 7:30 a.m. Saturday on Duke Street at Sweeley Street.

Police say Fairfax County resident John Thompson, 77, was crossing in the crosswalk when he was struck. He later died at a local hospital.

The driver remained on the scene and thus far there’s no word on any charges being filed, though police say they’re still investigating the crash. More from an Alexandria Police Department press release:

The Alexandria Police Department is investigating a traffic crash that occurred on Saturday, November 16, in the 3100 block of Duke Street.

At approximately 7:35 a.m., police responded to the area for a pedestrian struck in the intersection of Duke Street and Sweeley Street. Initial investigation indicates Mr. John Thompson, a 77-year-old Fairfax County resident, was crossing Duke Street in the crosswalk when he was struck by a motor vehicle. Mr. Thompson died from his injuries at a local hospital. The driver of the vehicle remained on the scene.

Last month a car ran into the front of the Sweetfrog frozen yogurt shop at the Alexandria Commons shopping center.