It’s all hands on deck at the Transurban offices as the company prepares for the launch of the new I-395 Express Lanes this weekend.

The 395 Express Lanes — which run from Edsall Road in Fairfax County up eight miles to the 14th Street Bridge, passing through Alexandria’s West End — are scheduled to switch over to High Occupancy Toll lanes this Sunday, Nov. 17. 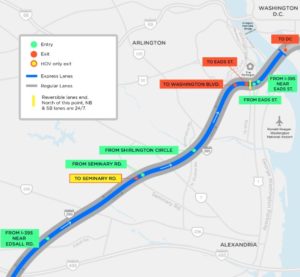 In a command center at 6440 General Green Way, just west of Alexandria city limits, Transurban staff sit in front of a sprawling wall of televisions flickering between views of Northern Virginia’s highways. In the camera feeds, construction crews can be seen working to finish up some of the final touches as they convert the two reversible HOV lanes into three Express Lanes.

The new Express Lanes are similar to ones installed earlier on I-495 and I-95. They require an E-ZPass to drive in, with options to drive toll-free if there are three or more passengers, or to pay a dynamic toll based on demand.

Mike McGurk, a spokesman for Transurban, said tolls — for those who want a quicker trip — are expected to average $8 but could range from a few dollars up to “high or mid $20s.”

McGurk said his main concern, going into the change, is safety. If a driver accidentally pulls into an express lane without intending to, McGurk said to keep driving and get to your destination — then when you get mail about the bill, contact Transurban and explain the situation.

The new Express Lanes should also relieve some of the traffic on the non-toll lanes as well, McGurk said, and estimated that non-Express traffic would see a 7-15% decrease in travel time based on experience with other Express Lanes. McGurk also said that the new lanes were unlikely to push more traffic onto Alexandria side streets.

A south-facing ramp at Seminary Road in Alexandria is currently planned to remain HOV-only, but McGurk said Transurban is currently in discussions with Alexandria to open the ramp to tolled, non-HOV traffic.