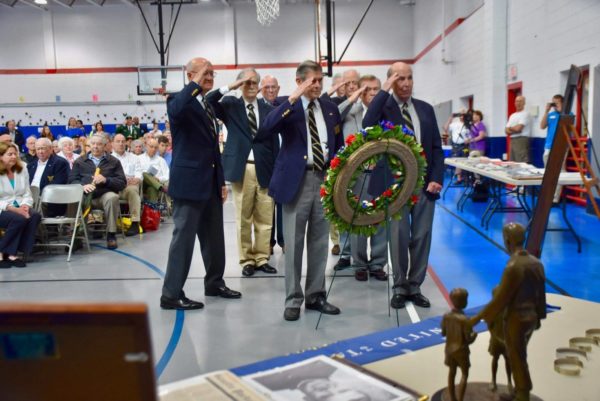 This Veterans Day, the Friends of Rocky Versace are holding their annual memorial for the MIA local Medal of Honor winner Rocky Versace and other Alexandria Veterans.

Versace’s unit was ambushed, but he was able to provide covering fire to allow other to escape. When he was held prisoner, Versace resisted interrogation efforts. The North Vietnamese Liberation Radio announced Versace’s execution on Sept. 26, 1965. His remains were never recovered.

The ceremony is scheduled for 1 p.m. on Monday, Nov. 11, at the Mount Vernon Recreation Center (2701 Commonwealth Avenue).

This year, retired Major General James Jackson is scheduled to be in attendance as part of a memorial celebrating the 50th anniversary of the end of the war.

“He’s going to speak and going to make a presentation to veterans in the audience who have not already received the Department of Defense Vietnam Veteran Lapel Pin,” Kevin Rue, a member of the Friends of Rocky Versace, said. “The qualifying period is service in US armed forces from Nov. 1, 1955 to May 15, 1975.”

The veteran doesn’t have to have served in Southeast Asia, so long as they were in the military during that timeframe. No paperwork is required, Rue said Jackson will take people at their word on their service.

Rue said a few veterans he spoke with recently at an event said they didn’t know about the lapel pin, and hoped that more who qualified to receive them would show up at the ceremony.

Rue said Jackson will also be available to give out certificates of honor to Gold Star families.

The event is also scheduled to feature a performance from the Army Old Guard Fife and Drum Corp — complete with Revolutionary War period uniforms — and the Alexandria Harmonizers.

The Friends of Rocky Versace gather at least twice a year, on Veteran’s Day and Memorial Day, to commemorate Versace and other Alexandrians who died in various American wars.

Photo via Friends of Rocky Versace/Facebook