Metro is moving forward with plans to develop the areas around the Huntington station in Fairfax County, just south of Alexandria.

The transit agency announced it would tap Stout & Teague as the property’s “master developer” by preparing and dividing the 12-acre site into parcels that could be then sold or leased to other developers.

Christian Dorsey, who chairs the WMATA Board of Directors and the Arlington County Board, called this developer stewardship system of the land long destined for redevelopment an “innovative approach” during the agency’s meeting late last week, during which members unanimously approved the contract.

Back in June, WMATA invited companies to bid for the chance to develop 12 of the 30 acres of land around the Metro station which recently re-opened after a lengthy closure to rebuild its deteriorating station platform. 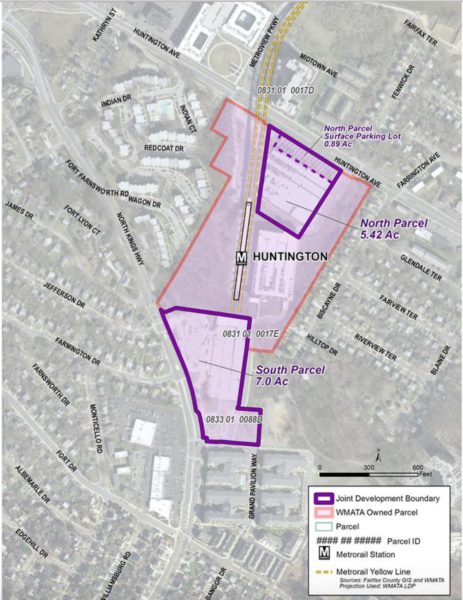 The transit agency’s plan called for taking down the garage on the south side of the property and replacing the north garage with two mixed-use buildings — one building to the north of the Metro station, and one to the south.

With the Board’s blessing, Stout & Teague has the green light to prepare the hilly land for buildings, and work with Fairfax County to re-zone the land for mixed-use development, Metro’s Vice President of Real Estate Nina Albert said during the meeting.

“They have agreed to not participate in any future development, but instead to work with us to market and sell these properties,” she said, referring to the developer.

Metro previously contracted with Fairfax-based Stout & Teague in 2002 to develop a section of the agency’s land into the apartment complex The Courts at Huntington Station, along with several townhouses the developer finished in 2011.

A few years later, Metro tried to interest developers in another, 1.15-acre part of the land to no success.

Now, Albert says the time to develop the rest of the land is right considering the station’s rail connections to Amazon’s second headquarters and the its eventual connection with Richmond Highway’s bus rapid transit line.

“There’s a lot of dynamic activity occurring and we should be planning now for what the station could be, and envisioning that,” she said.

Because re-zoning is typically an 18-month process in Fairfax County, efforts to re-level and prepare the sights for sale are expected to finish by 2023.