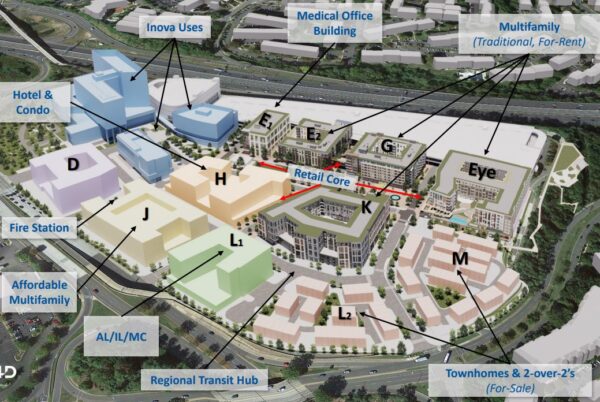 The “West End” project is a lumbering titan, one of the most enormous of the development projects in progress. While projects of that scale can move slowly — this one first reared its head in late 2020 — the Landmark Mall redevelopment is building momentum as it moves toward Planning Commission review next month.

Four blocks of the sprawling development, Blocks E, G, I and K, are scheduled for review at the Planning Commission on Tuesday, Dec. 6. The blocks consist of a mix of multifamily residential, ground floor commercial space, and medical offices.

Those four blocks are some of the furthest along in the design process according to representatives of developer Foulger-Pratt at a meeting last month.

Blocks E and G are part of a new housing development called Aspect, featuring a total of 390 units and a bridge connecting them with 80,400 square feet of retail space. The buildings will also have 119,500 square feet of medical office space, part of the link to the separate Inova Hospital campus anchoring the development.

Block I, listed as “Block Eye” in other development documents, is planned as a project called The Brightly. Block I will also be a mixed-use building, with 390 apartments and 105,000 square feet of commercial space. Developers said in previous meetings the goal is to have a “big box ” occupant on the ground floor, with possibilities ranging from a gym to a traditional large retail store.

The last piece up for review in December is Block K, called Thrive in other developer documents. It sits at the heart of the new development and is described as having a more “neo-industiral” aesthetic. The docket item for the Planning Commission said Block K will have 337 apartments and 32,000 square feet of commercial space — smaller than the other blocks up for review.