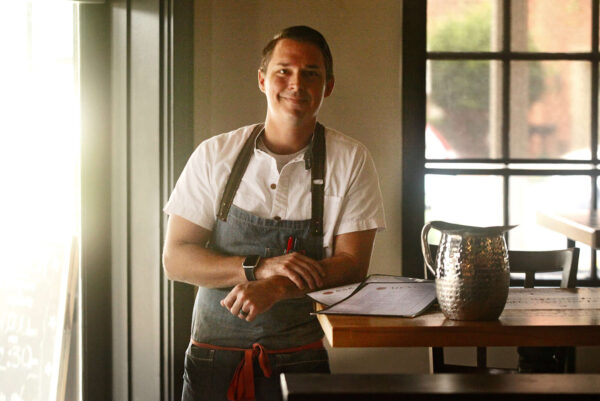 Justus Frank and Jeremy Barber are sticking with Italian food with their pop-up restaurant Elo’s Italian Restaurant in Del Ray.

It’s been a little more than a year since the partners closed their date night spot Live Oak (1603 Commonwealth Avenue) and reopened it as Elo’s. The pop-up has been a hit with customers, Frank says, adding that it’s a lot of trouble and expense to switch back to a southern cuisine concept.

For one thing, Frank hired pasta chef Francisco Quinteros to prepare his pasta dishes, and worked with a team of staffers for a year-and-a-half on the concept. The company, like most restaurants, had to raise prices recently and Frank has focused on more vegetarian dishes, since the price of meat has gone up.

Elo’s Italian also started a Sunday brunch about a month ago.

But it’s more than the money, Frank says. Elo’s is named after Frank’s daughter Eloise. He’s a family man with two kids now — not the single entrepreneur who, with Barber, opened Live Oak and The Garden.

Frank: It’s going pretty well. It’s a balancing act of being a chef of two restaurants at once. It’s about to be three restaurants, which is one of the motivations behind keeping this as an Italian restaurant — rather than switching it back over to southern cuisine, retraining the staff that’s already got a year-and-a-half under their belts. I recruited a pasta guy from D.C. to come and work for me, and the previous menu was just too laborious.

I’ve been having a lot of fun doing it. So that was the major motivation behind it —  that it was better for food costs, and the feedback that we’d gotten from the guests who come in and eat the Italian fair that we have seem seem happy and really wanted it to stick around.

ALXnow: What did you study at Johnson and Wales University?

Frank: Just general culinary arts. They give you a New World Cuisine class and an Italian class and a French classical class and things like that. I studied meat fabrication, butchery, baking and pastry, but I got my hands dirty working in kitchens here in D.C.

When I was in culinary school, I did my culinary internship at Notti Bianche (now closed) and worked with chef Tony Chittum and I got my feet wet working with Italian cuisine and Mediterranean-centric products, and making fresh pastas and being stuck in the basement of this parking garage in the George Washington University Hotel as a culinary intern, learning how to make fresh pasta and roll it out, fill the pasta and different cuts, and then also being involved in learning the service aspects of an Italian restaurant.

ALXnow: So, Elo’s Italian is like going back to your culinary roots — where it all started?

Frank: Right. With my background, being in Italian cuisine, I always knew that I wanted to eventually have an Italian restaurant. When I started cooking Italian food again, a year-and-a-half ago, when we switched to the Elo’s Italian Pop- up, I was reminded why I love that type of cuisine, why I liked the flavors and the smells — and those foundational experiences paved the way for me being able to eventually become a restaurant owner.

ALXnow: Live Oak was known as a date night spot. You’re a family man now. Did the concept change because you changed into family restaurant when you got your own family?

Frank: Like you said, I was single when we started the southern restaurant here and I had a lot of experience with traveling down to Charleston and really fell in love with the cuisine there. But when I met my wife and we decided we were gonna stay here forever, and then we started to have children. It changes your perception on dining completely. As you know, dining out with children is an animal of its own class. Everybody wants something different.

I’ve got two daughters, and you know, they absolutely shaped the way that I live. Where I would have no problem being here for 15-16 hours a day in the past, I find time now to be able to go to the swimming pool with my family and then also be able to make it to work and serve the food that I love. And my kids love when they come in here to visit me if they haven’t seen me for a few dinners in a row.

ALXnow: Have you had to raise prices due to inflation?

Frank: Absolutely, we have had to adjust some prices based upon things like the price increase of cheese. Grana Padano cheese is $1 more expensive now than it was this time last year.

Smoked chicken wings are a staple on The Garden menu. During the pandemic, the price of chicken wings quadrupled, and I said I’m not going to do that anymore. So, we started selling chicken drumsticks and thighs and getting those in and serving them in the same style.

ALXnow: How did it go?

Frank: They didn’t sell as well as chicken wings. I do find myself making a lot more vegetarian items now, because there are great vegetables out there in abundance. The smoked potato gnocchi is vegetarian right now. It’s roasted corn zucchini, basil pesto, toasted pine nuts, whipped ricotta cheese. It’s light and it’s got lemon zest and has a vegetable stock based sauce, making it a vibrant bright green. It’s a perfect example making vegetarian dishes that people can add chicken breasts or another protein to if they’d like to.

ALXnow: Are you still feeling the effects of the pandemic?

Frank: We’re rebranding a restaurant, we’re presenting a new front. We’re trying to touch new customers, and also trying to get all of our previous customers to like the new concept. We would love to get back to pre-pandemic numbers, and it’s a it’s a process and we know that it takes time. We know that we have a good product and that we try to put our best foot forward and provide the best service to our customers.

A new coffee/bubble tea shop is being planned for 411 Cameron Street in Old Town, according to a special use permit (SUP) filed with the city. The location was previously…

Several vacancies have popped up across a dozen of Alexandria’ various boards and commissions — bodies that ultimately help to shape the future of the city. Some of those boards…

It barely got more than a blip in the Northern Virginia Regional Park Authority’s (NOVA Parks) new strategic plan, but the regional park organization said one of its near-term goals…