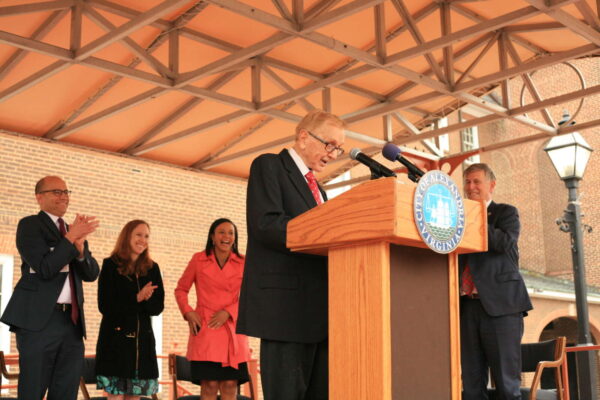 Friends and city officials gathered outside City Hall yesterday to celebrate one of Alexandria’s most storied centenarians: J. David Bailey, the oldest surviving veteran of the Battle of the Bulge.

Bailey, who turned 100 on January 3, was 22 when he was deployed to the European theater with the 422nd Regiment of the 106th Infantry Division. His battalion was captured by German troops while en route to St. Vith, Belgium, on Dec. 16, 1944. Bailey later escaped captivity and eventually appeared on the cover of the victory edition of Stars and Stripes.

When asked how he escaped captivity, Bailey told ALXnow “I happened to be going the right direction at the right speed at the right time.”

Since then, Bailey has won numerous awards for his military service and has attended ceremonies commemorating the Second World War.

At the ceremony, Bailey was presented with folded flags from the state and national capitals, along with a challenge coin from the Alexandria American Legion Post 24 and a key to the city.

Upbeat music from the Alexandria City High School Jazz Band accompanied the ceremony. Congressman Don Beyer was around 50 years when Bailey was born and congratulated him on hitting twice that.

A unique thrill for us as we had the opportunity to honor the oldest surviving veteran of the Battle of the Bulge.

Thanks for being an Alexandria hero. pic.twitter.com/quIk1t8seH