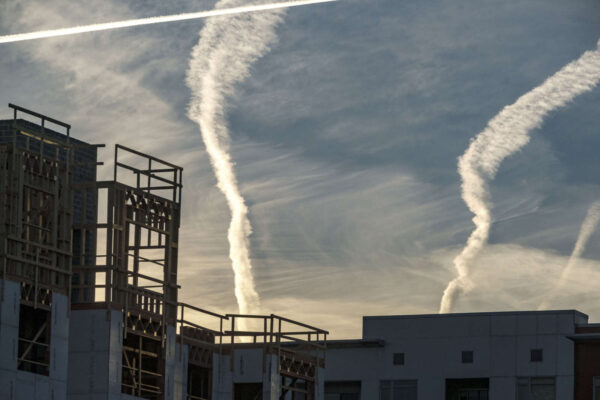 With Potomac Yard Metro Station coming along, city staff and leaders recently took a look at the rest of the planned development.

At a meeting of the Potomac Yard Metrorail Implementation Work Group on Monday, Principal Planner Dirk Geratz took group members on a virtual tour of the development site and outlined how far development in the area has come — and how far some parts still have to go. 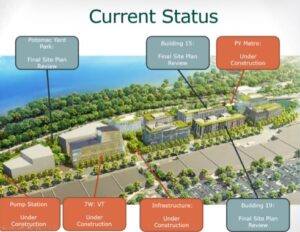 A map of the development corridor (meeting documents weren’t posted at time of publication, that’s why it’s so small) showed parts of Phase 1, the area closest to the Metro station where the Regal Cinema had been located, that are under construction. Phase 1 includes 19 acres of potential and planned development.

Furthest along is the Potomac Yard Metro station, which is currently planned to open later this year. Geratz said the north pavilion at the station is nearly complete. Full completion of the station is scheduled for summer 2023, a few months after the station opens. The pump station at the opposite end of Phase 1 is also under construction.

Geratz said work is starting on the nearby infrastructure, but said that process can be more time-consuming.

“That’s grading for roadway and future pad sites, also importantly installation of utilities: water, sewer, electricity,” Geratz said. “That’s all underground, so it’s a lot of prep work has to be done before you can get started on paving the streets and construction started on the street.”

There are two residential buildings planned adjacent to the Metro station. Geratz said those are in the late stages of the site planning process.

“Once they get the building permit, they’ll be ready to start construction on those two buildings,” Geratz. “I’m guessing close to two years of construction, so those could be completed summer/fall of 2024, it depends on when they start exactly.”

Geratz said the residential buildings’ opening should coincide roughly with the opening of the Virginia Tech campus if all goes according to plan, but the Potomac Yard area has already had its fair share of delays.

But while Phase 1 of the Potomac Yard redevelopment should come online in the next few years, Phase 2 is still several years further down the road. Phase 2 includes the current retail shopping areas and the large parking lot.

The land area for Phase 2 is 50 acres — significantly larger than Phase 1’s 19 acres — and Geratz said there are still some vacant spots around the planned Phase 2 development area.

“Many retailers, including Target, have leases they’re committed to into the late 2020s, so there won’t be any immediate development there,” Geratz said. “There could be partial development on the out-parcels, but that’s maybe out five or seven years.”