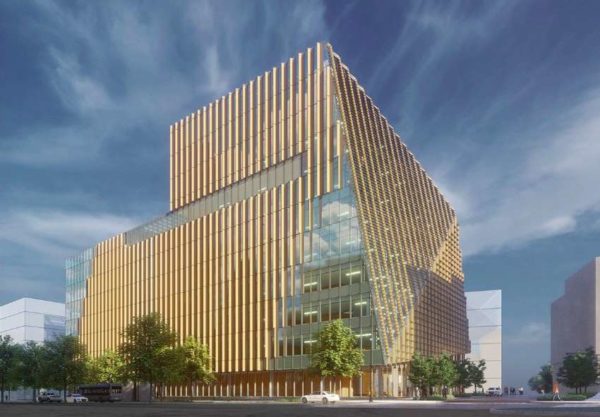 With the groundbreaking of the first of Virginia Tech’s Innovation Campus buildings, Alexandria took a step into a new future on Tuesday.

Governor Ralph Northam joined top brass from Virginia Tech, Boeing, master architect JBG Smith and hundreds of visitors at the groundbreaking for a state-of-the-art 300,000 square-foot building. He said that, when completed, the academic buildings will be places “where academia, government and industry connect working to solve problems through technology.”

Virginia Tech plans on opening the first of three academic buildings in 2024, and the school anticipates teaching computer science research and development programs to 750 master’s degree students when the project is completed in ten years.

Mayor Justin Wilson thanked City Manager Mark Jinks and his staff, as well as the Alexandria Economic Development Partnership, which was integral in bringing Amazon’s HQ2 project to the region.

Tara Laughlin is studying for her Master’s degree in computer science at the Innovation Campus, and is one of seven Boeing graduate scholars. Boeing also gave the campus a $50 million gift.

“I want to make a difference in the field that I work in, but I honestly just didn’t know where to start,” Laughlin said. “The Innovation Campus answered everything that I’d wanted.”

Matt Kelly, the CEO of JBG Smith, the master developer of the Virginia Tech Innovation Campus, said that the future looks bright for Potomac Yard.

“When we began courting Amazon alongside the Commonwealth to make Northern Virginia home to HQ2, one of the main points of attraction that they had to the D.C. region was our strong base of tech talent,” he said. “Virginia Tech’s Innovation Campus brings that right next door, and delivers on a future of diversifying our economy and broadening that talent base for many decades to come.”

So thrilled to join with @GovernorVA and @VTSandsman and a group of dynamic leaders to break ground on the @virginia_tech Innovation Campus in Alexandria! pic.twitter.com/l5qS283JOc

We were very happy and excited to be with @VTmetroDC this afternoon for the Innovation Campus groundbreaking! #AlexandriaVa #NationalLanding pic.twitter.com/UyMuZqlfZI

Read more →
More Stories
Update: Missing Alexandria toddlers returned home to their motherAsk McEnearney: What updates should I consider if I’m thinking about selling my home in a year?