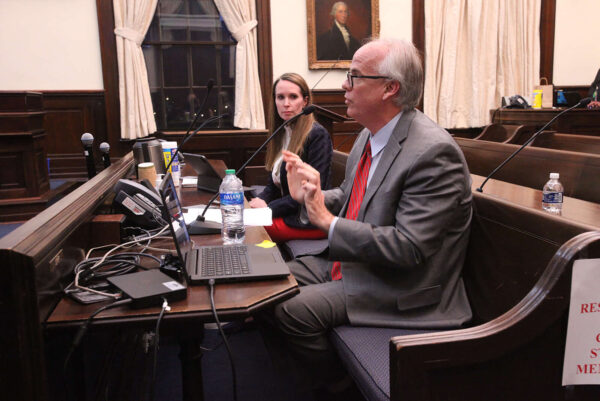 Five months after a 16-hour power outage disrupted Del Ray’s Art On The Avenue festival, Dominion Energy says it will invest $17 million over the next three years to improve reliability in the city.

That was the gist of an hour-long update from Dominion to City Council Tuesday night (March 22), where Bill Murray, Dominion’s senior vice president of corporate affairs and communications, informed City Council that the energy giant plans on spending $3.4 million this year, $8.5 million in 2023 and $5.2 million in 2023 on 20 “incremental reliability investments” in areas affected by outages in Alexandria, and will begin planning with city staff next month.

“We’re going to plan in April to have some workshops with your staff around the first five,” Murray said.

There have been few outages in Alexandria since Art On The Avenue on Oct. 2 — forcing businesses to close for the the busiest day of the year on Mount Vernon Avenue in Del Ray. The weather was nearly perfect that day, with clear blue skies. Since the event, Murray said, Dominion has replaced 1,000 feet of power cables in the area, and will give future Art On The Avenue festivals the same attention as it gives to polling places on Election Day.

“Any of your polling places, regardless of the weather forecast on Election Day, whether it’s bad weather, good weather, whatever it might be, we always have a plan for each individual polling precinct,” Murray said. “We recognize things happen, and we don’t want the marching democracy being interrupted by an outage. So, we’re going to adopt that approach with this particular festival.”

“I’ll be honest, we were a little hampered by not having something to kind of look at tonight,” said Mayor Justin Wilson, who has been critical of Dominion for years.

Council Member Kirk McPike said that a PowerPoint presentation would have been useful after “repeated failures of our electrical system over the years.”

“We need the people of Alexandria to be able to see what we’re discussing here, what point you’re raising, have a better sense of what’s going on here,” McPike said. “Right now I don’t think they do.”

Dominion last spoke with the council shortly after the Art On The Avenue outage, and provided the city with maps on where it plans on making improvements in the city.

Council Member Alyia Gaskins said she appreciates Dominion’s plan to prevent an Art On The Avenue outage from reoccurring, but that the city hosts multiple large-scale events throughout the year.

“I’m also thinking about the fact that we have so many big, really important events in the city, beyond Art On The Avenue, and that was catastrophic and devastating,” Gaskins said. “Maybe there’s a top five list of events that we know are huge economic generators for the city, and having that same type of pre-scan, pre-assessment, as well as a point person who is on-site would be critical for those events as well.”

Vice Mayor Amy Jackson said that Dominion is a valuable partner, and that she would appreciate its representatives to be on the ground for large festivals.

“I don’t know how you would have enough manpower and boots on the ground to do that for every festival,” Jackson said. “That’s close to impossible, but I’d like to see you try. If you’re promising one to Art On The Avenue, then then absolutely, I’ll take you up on all of them. We’ll give you the calendar.”

END_OF_DOCUMENT_TOKEN_TO_BE_REPLACED

More Stories
Ask McEnearney: How can I refresh my home for spring on a budget?Carlyle health center development starts to seek tenants ahead of construction