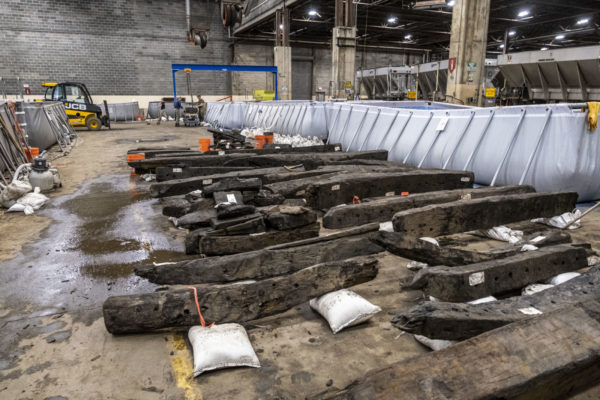 Almost exactly four years after archeologists recovered three 18th-century ships from under the Old Town Waterfront, Alexandria is planning on sending at least two of them back to Davy Jones’ Locker.

Three ships were discovered under the Robinson Landing construction site in March 2018. While the most intact of the trio was sent to Texas A&M for study and will get a new Torpedo Factory exhibit next month, the other two have sat in water tanks in the DASH bus barn. At a meeting of the Waterfront Commission, City Archaeologist Eleanor Breen said that sometime this year the city will start moving the ships out of their 12×24-foot tanks and out to Ben Brenman Pond (4800 Brenman Park Drive).

“Based on [an] assessment, the recommendation was that [the ships] be stored at the bottom of Ben Brenman Pond; at the south end of the pond,” Breen said. “Jack [Browand, division chief of Parks and Cultural Activities] summarized it perfectly the other day: ‘We’re resinking three ships in a pond five miles west of where they were found.”

Breen noted this isn’t the first time rediscovered ships from this time period have been resubmerged. A Revolutionary War-era barge was discovered then re-submerged near Baltimore. Breen said the pond was chosen because it was the least risky to the timbers and would be the easiest to access. The “ponding” project received funding in the FY 2021 CIP.

“We’re finalizing the project schedule, including a date for pre-construction meeting on-site,” Breen said. “It will begin in April and last 4-6 months. We will offer a family-friendly event during ‘ponding’ process and in the future will be installing site interpretation.”

Meanwhile, Breen said a feasibility study for a potential new waterfront museum could start later this year with the idea of the museum eventually being home to the most intact ship. The study will look at potential funding and business models, as well as reviewing the sustainability of a waterfront museum.