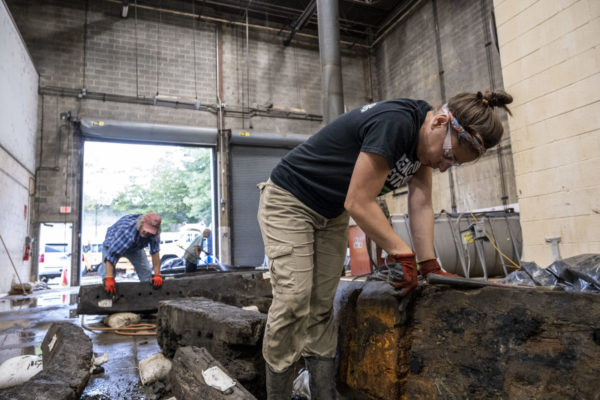 The Alexandria Archaeology Museum announced on Twitter that a new exhibit coming to the Torpedo Factory will offer a digital guided tour of one of the ships found buried under Old Town’s waterfront.

In 2018, hulls from three mid-18th century ships were found buried underground during an excavation at the Robinson Landing development. The crown jewel of the archeological discovery, however, was a mostly intact lower hull from one of the ships.

The ship has become an object of intense study and even some belated shipbuilding criticism. The hull was even carefully taken apart and sent in pieces to Texas A&M for further study.

The eventual fate of the ship still remains unknown, with the idea of a new Waterfront Museum having been floated around as a possible home.

The new exhibit won’t take up as much space as the full ship eventually will: it’s opening in Studio #9 on the Torpedo Factory’s first floor.

The exhibit is scheduled to open Friday, April 1, and will be there until June.

View ship construction through the eyes of maritime archaeologists in SeeWorthy a new exhibit highlighting the technology used to digitally reconstruct historic vessels. The exhibit opens on 4/1 in Studio #9, on the 1st floor of the Torpedo Factory Art Center #WaterfrontWednesday pic.twitter.com/5KS8gX2yjp