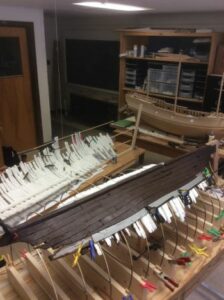 The discovery of the Old Town Armada was an unexpected boon to Alexandria archeologists. But impressive as it is that so much of the three ships have remained intact after centuries underground, recent archeological work has uncovered an interesting detail on one of them.

As part of the ongoing study of the ships, the Conservation Research Lab discovered a flaw in the ship’s design that likely handicapped its seaworthiness.

“Creating the model for Ship #2 has exposed an interesting feature associated with the ship’s construction,” the lab reported. “There is a bump in the planking on the starboard side of the vessel. This is because the ship’s carpenters accidentally made five floor timbers too flat in this area but noticed their mistake when they started planking the vessel.”

A dendrochronological study of the timbers on the timbers identified that at least one of the ships was most likely made in the Boston-area and likely used to make cargo runs to the Caribbean. The error was found as the lab was putting together digital and physical models of the three ships.

“The process of creating a digital model entails piecing together individual timber scans to recreate the archaeologically recovered ship remnant,” the lab said. “It is a time-consuming process to ensure that the timbers align correctly and produce a faithful digital model for future study, interpretation, and education.”

The lab reported that to compensate for the error, carpenters likely had to form the hull planking around the bump, creating an S-shape in the hull that made it slightly more cumbersome to sail, which is perhaps why it and two other past-their-prime ships were deliberately buried as part of the waterfront expansion in the 18th century.

“This defect probably affected the vessel’s sailing ability because the bump would have disrupted the hull’s hydrodynamics,” the lab reported. “This 200-year-old foible is not particularly significant in the larger picture, but it does speak to the human capacity to both make and compensate for mistakes.”