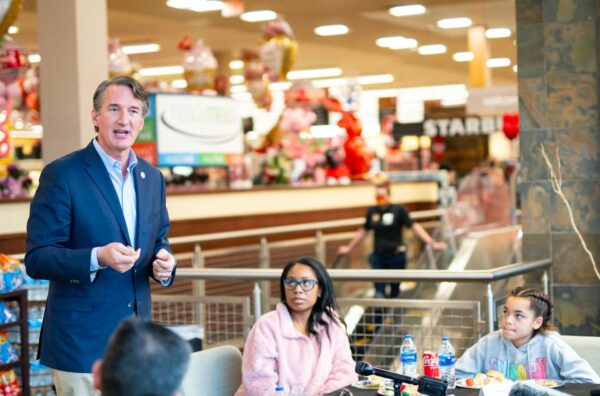 An unmasked Governor Glenn Youngkin made a surprise stop at the Bradlee Shopping Center Safeway yesterday (Thursday), and afterward the Alexandria Democratic Committee tweeted for him to “get out of Alexandria.”

Youngkin, a Republican, spoke without a mask inside of the store at noon. He discussed “the elimination of the grocery tax, the rising costs of groceries, and the impacts of inflation on Virginia families and the high cost of living,” according to an email.

“Please let us know how our cost of living is going to go down by slashing needed supports to families @GlennYoungkin,” tweeted the Alexandria Democratic Committee. “Otherwise, get out of Alexandria and come back when you’re ready to actually invest in our community.”

Youngkin was also heckled by a shopper at the store.

“Governor, where is your mask?” the shopper asked. “Look around you, Governor. You’re in Alexandria. Read the room, buddy.”

Alex Dems also posted this message: “Glenn Youngkin is here at Safeway in ALX to talk about cost of living. We’d love to hear about how his budget which slashes taxes that fund housing and food is going to decrease our cost of living. Seems like the math doesn’t work on that one.”

Mayor Justin Wilson said he had no idea about the governor’s visit beforehand, and only found out when he was told about it by a reporter.

“No clue,” Wilson said. “He did not make us aware he was coming.”

Wilson has never spoken with Youngkin, but would welcome a conversation.

“Sure — we would love to meet with him,” Wilson said.

Youngkin, who got only 24% of the Alexandria vote in the November election, is under fire for ending the mask mandate in public schools shortly after taking office, and Alexandria’s School Board has joined in a lawsuit challenging that order with six other jurisdictions.

Before stopping in Alexandria, Youngkin visited by the office of Fairfax County Supervisor Pat Herrity — the lone Republican on the 10-person board of supervisors. The visit was not on his public schedule.

“I was honored to host the Governor at my West Springfield office this morning to discuss issues important to Fairfax County and Springfield District residents,” Herrity posted on Facebook.

Youngkin’s visit was short, as he was scheduled for a 2 p.m. COVID-19 update in Richmond, followed by a meeting with the Virginia Senate Republican Caucus in the Governor’s Mansion.

Youngkin’s office did not respond to requests for comment.

Please let us know how our cost of living is going to go down by slashing needed supports to families @GlennYoungkin. Otherwise, get out of Alexandria and come back when you’re ready to actually invest in our community.

END_OF_DOCUMENT_TOKEN_TO_BE_REPLACED

More Stories
Just Listed in AlexandriaAsk McEnearney: How did the real estate market for the second half of 2021 compare with 2020?