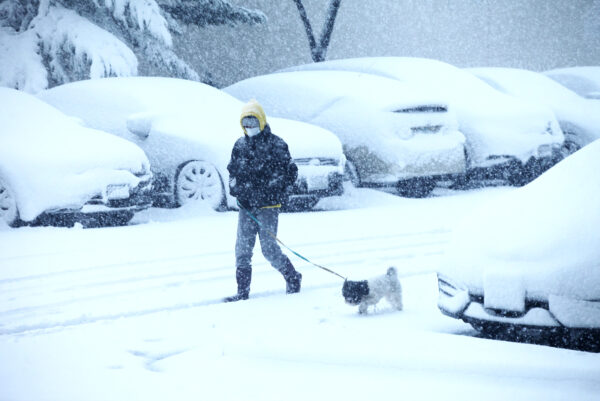 (Updated 12:30 p.m.) Alexandria’s bus service DASH has suspended all service due to the heavy snow, while emergency services are across town responding to stuck vehicles and downed wires.

DASH said in an alert that service would be suspended due to road conditions and would remain suspended until tomorrow (Tuesday).

“DASH bus service is temporarily suspended to due worsening road conditions,” DASH said. “For the safety of our passengers and operators, DASH will continue monitoring conditions and provide updates as they become available.”

Meanwhile, it’s been a busy morning on the emergency services scanner in Alexandria. City plow trucks shifted from treating to focusing entirely on plowing around 10 a.m.

There are accidents and temporary road closures reported across town, from a two-vehicle crash at Duke Street and S. Pitt to a truck blocking traffic on Braddock Road just east of Van Dorn Street. Crash investigations are currently suspended.

Total shutdown on many major roads with cars stuck on hills. This is Van Dorn Street in Alexandria @WeatherNation @PMBreakingNews #snow hey @VaDOTNOVA this is a major problem @stevechenevey @capitalweather pic.twitter.com/NtCZAjLyWf

The Fire Department has also been responding to calls of fallen power lines closing streets. At Seminary Hill, fallen power cables closed Peacock Avenue near the Inova Alexandria Hospital. Transformers just “popped” in the area, so residents nearby can expect an unpleasant burning smell.