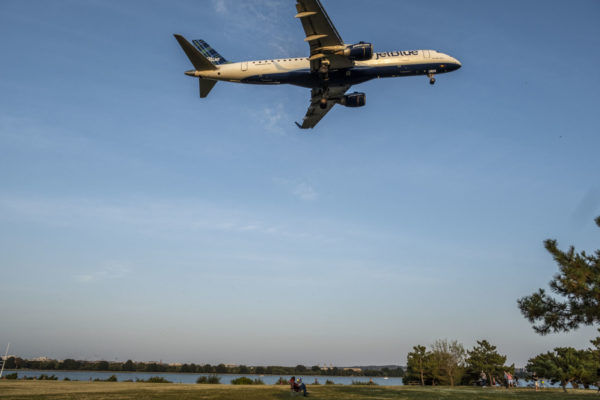 It’s another beautiful, sunny day in Old Town where you occasionally can’t hear the person standing next to you speaking because an airplane from National Airport is flying directly overhead.

Airplane noise has been constant source of frustration in recent years for residents of Alexandria and neighborhoods in Fairfax just to the south. If you’ve complained that it seems like it’s gotten worse lately, the city confirmed that suspicion in a presentation for a meeting planned next Tuesday (Oct. 26).

The city’s aim, according to the presentation, is to push that overhead airplane traffic toward the center of the river and further south.

“[The city objective is] to push the flight path to the east toward the center of the Potomac River, further away from the City,” the presentation said, “[and] reduce the number of early east and west turning movements before the Woodrow Wilson bridge.”

The presentation noted that City Manager Mark Jinks has been working with affected jurisdictions nearby — Prince George’s County and Fairfax County — to hire a consultant to study possible noise mitigation measures. The Study is $250,000 being split between the three jurisdictions.

Even so, the presentation warned that any potential fixes are still years way.