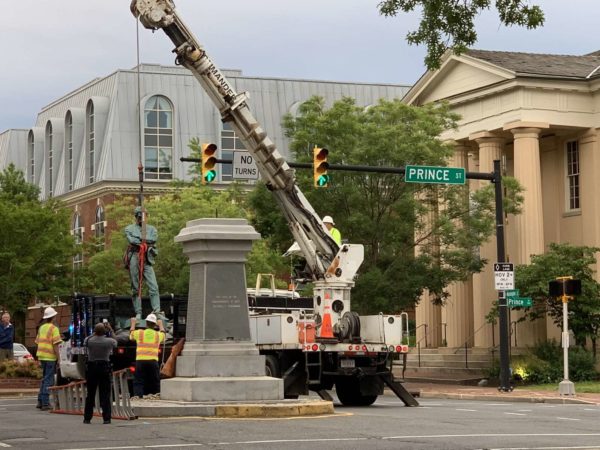 As part of an ongoing effort to commemorate civil rights efforts both past and ongoing, the city hosting a film screening and virtual discussion about Confederate statues around Virginia and their recent removal.

The discussion will center around How the Monuments Came Down, a documentary produced by Field Studio and the VPM Media Corporation.

The documentary focuses primarily on Richmond, with a look at the history of the statues and the culture around that. A virtual discussion tomorrow night (Wednesday) at 7 p.m. will be hosted by historian Lauranett Lee and Eugene Thompson, a former member of Alexandria’s Ad Hoc Advisory Committee on Confederate Memorials and Street Names.

The committee, which met through 2015-2016, was part of a tempestuous fight over whether to rename some city streets or remove certain memorials. The committee eventually advised the renaming of Jefferson Davis Highway — now Richmond Highway — and to consider individual requests to rename streets that could be named for Confederate leaders. Discussions are still ongoing about renaming some streets, with the Alexandria Times reporting some local back-and-forth over Lee Street in Old Town.

While the committee voted to recommend that the Appomatox statue remain in place with context added to the site, the statue was ultimately removed last summer by the Daughters of the Confederacy after the city was granted authorization by the state to take it down.

The film How the Monuments Came Down is available to watch for free until tomorrow. Those interested in the discussion can register online.