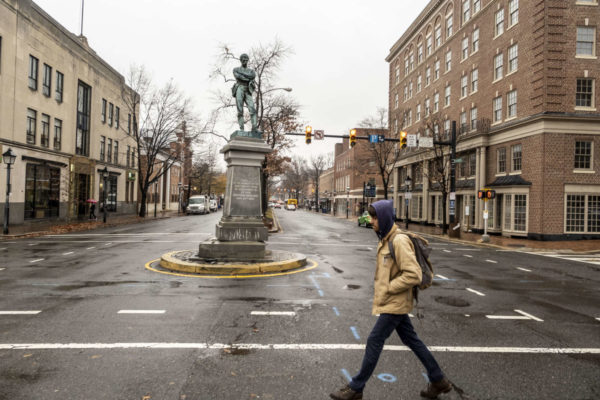 With both the Virginia House and Senate approving legislation to allow localities to remove Confederate statues, it would seem the Appomattox statue’s days are numbered.

The statue sits in the center of the intersection of S. Washington Street and Prince Street, where it’s been occasionally struck by cars.

The city has been working to remove the statue for years — former Mayor Bill Euille got his start in Alexandria politics in the 1960s protesting the statue — but a Virginia law says memorials to war veterans could not be removed.

If the legislation becomes law, Mayor Justin Wilson says the statue will be removed.

“In 2016, Council voted unanimously to remove the monument out of the middle of Washington Street,” said Wilson. “That’s the existing city policy. If the legislation passes and it’s signed by the governor, then we would work to execute that council policy.”

Wilson also said that the council will have to work with the Daughters of the Confederacy, which owns the monument, on a new location, like a city museum.

Some Alexandrians had alternative destinations in mind.

The statue has a complicated history. It was built in 1889 to honor “the Seventeenth Virginia regiment who yielded their lives during the four years’ of civil war” according to the Alexandria Gazette’s reporting at the dedication. The location in the center of Prince Street marks the spot where several Alexandrians met to leave the Union-occupied city and join the Confederate army.

Rev. G. H. Norton, a chaplain who served in the Confederate camp, said at the time of the dedication that he hoped the statue would mark the end of the strife wrought by the war.