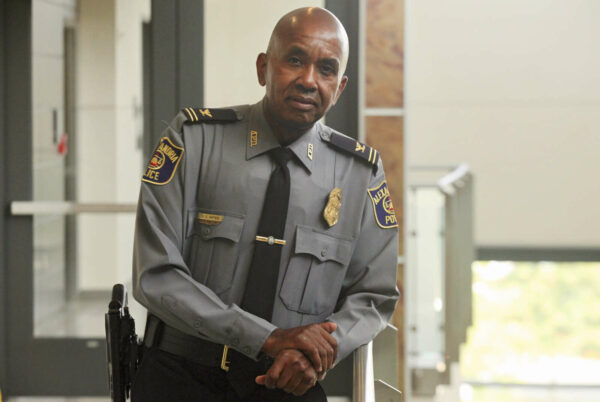 It’s taken Don Hayes 40 years to get to the top of the mountain, and the acting chief of the Alexandria Police Department wants to keep it that way.

It’s been a less than a month since Hayes took over after the sudden departure of Chief Michael Brown, who gave three weeks notice and pulled up stakes for the West Coast to handle family matters. Now with a national search underway for Brown’s replacement, Hayes has let City Manager Mark Jinks know that he wants the job.

“They’re gonna do a process, and I’m going to put my hat in the ring and we’ll see what happens there,” Hayes told ALXnow in a recent interview at police headquarters.

Hayes’ rise in the department has been steady, becoming a sergeant in 1996, a lieutenant in 1999, a captain in 2013 and then being named assistant chief under Brown in 2019.

Since taking the reins, Hayes has used early evenings making the rounds to communities in a trust-building effort. His department has been plagued by compensation issues, low morale, rising crime throughout the city resulting from pandemic and other challenges that have stretched both the APD budget and the nerves of officers.

“I go around to communities because they know me,” Hayes said. “And I know them. But what is happening, because of the national narrative, is that I believe that there’s a lack of trust in some communities, with the police department.”

ICYMI: We had a lot of fun at the Alexandria Community Cookout at Southern Towers on Wednesday! It was great connecting with so many of you!@AlexVASheriff @AlexandriaVAFD @RPCA_AlexVA pic.twitter.com/Ll3PmDGW77

Hayes is married with two adult children, and has lived in the city for 30 years. A native of Washington, D.C., Hayes followed his older brother Clarence into the U.S. Air Force, where he became a military police officer. After being discharged and returning home four years later, he kept on a uniform by joining the Alexandria Police Department in March of 1981. He has a degree in business and finance from Norfolk State University, a Master’s degree in management and leadership from Johns Hopkins University and a Master’s in divinity from Liberty University.

Hayes has been the pastor at Oakland Baptist Church for the last 15 years. He’s taken a break sermonizing every Sunday since taking the acting chief role, but says he’ll return to the pulpit this fall.

“I believe in leadership by inclusiveness,” he said. “I don’t make decisions in a silo. I bring the leadership team together, we discuss our options and we make the best informed decision that we can.”

Hayes also says his staff are working with Alexandria City Public Schools on drafting a new memorandum of understanding since City Council defunded the school resource officer program. He said he hopes the new MOU will be ready before school starts on August 24.

“Students are going to be students, and we will have things in place to ensure that schools are safe,” he said.

Hayes, who is the second Black man to lead the department after Chief Earl Cook, said he was fortunate to be able to work with Al Beverly, the first-ever Black Alexandria police officer. Beverly, who joined the department in 1965, passed away last year.

“I remember (Beverly) telling me the story about how, at one point time, he didn’t know what side he was on because he wasn’t accepted by the police department,” Hayes said. “And he wasn’t accepted by his community, because he thought that they had pretty much turned on him. But he stuck it out because he wanted to blaze the trail for people like myself, that one day I would be able to join his police department and make an impact.”

Hayes continues, “When I think about the conversations that I used to have with him and talk to him and now to be able to sit in the seat… to actually make decisions to try to make this police department the best that it can be, it’s really sobering. It’s a challenge.”