If you’ve traveled along Duke Street during rush hour, you probably recognize the intersection above, and might even have a visceral reaction to it. The one-late turn from Duke Street onto Telegraph Road, and by extension to the Beltway, faces frequent backups not only along Duke Street, but in surrounding neighborhoods packed with cut-through traffic.

The good news: the city says the intersection will be considered as part of a separate project launching later this year.

Jill Hoffman, a resident of the Taylor Run neighborhood just north of Duke Street, said that over the last several years navigation apps have diverted traffic off the crowded Duke Street onto smaller, residential streets that can’t handle the traffic.

“If you live on West Taylor Run, you cannot get out of your driveway during rush hour,” Hoffman said. “What has happened over the years is a lot of cut-through traffic has bailed off arterials and is using our neighborhood as a cut-through to get to that Beltway entrance. The reason they do that is because if you come down Quaker or Duke streets, the chokepoint is that intersection.” 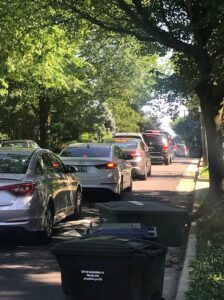 In a presentation from 2019, city staff identified the intersection as a “high crash location” as part of the city’s Vision Zero crash analysis. In addition to the backup onto neighborhood streets, the city recognized issues of weaving through intersections and illegal left turns out of the right-turn only-lane of West Telegraph Road.

“We want to have an engineer assess the problems — or the problems,” Hoffman said. “During rush hour, this area of Alexandria comes to a standstill. It has significantly affected the quality of life… I want an engineer. Not BPAC, not constituents who think they know what’s going on, I want engineers to review that intersection and see if it can flow better — and to do that before anything changes on Duke Street, since it’s the single biggest problem on Duke Street.”

But for those hoping the Duke Street In Motion project — which launches its community outreach phase next — might help solve the problem: no dice.

“The scope of this project is not addressing the cut through and Telegraph Road interchange,” Alexandria communications officer Andrea Blackford said. “Duke Street In Motion, per grant funding, is focusing on transit (bus) improvements. Those other two topics are part of a separate project called Duke Street and West Taylor Run Project.”

“In addition, the project includes design plans for the preferred alternative, which will lead to construction in 2024,” Blackford said. “Community outreach for the project is anticipated to start in fall 2021. For more information or for regular updates, please visit the city’s Duke Street and West Taylor Run Project Webpage.

Still, for Hoffman, putting the intersection improvements after the transit project casts a pall over the process.